Both sides built up stringent defense backlines and all attempts by both sides missed the target in the lackluster and somehow friendly game. The only yellow card for players went to South Korea's midfielder Cho Gue-sung in the late 89th minute.

Uruguay hit the post twice through captain Diego Godin's header from an out-swinging corner and Real Madrid midfielder Federico Valverde's power shot in each half, which came closest to breaking the deadlock. Hwang Ui-jo wasted South Korea's best chance, skying a shot from 10 yards out with only the goalkeeper to beat after connecting Na Sang-ho's cross inside the box.

South Korean forward Son Heung-min, who started the game wearing a mask to protect a broken left eye socket, had just one scoring effort in the closing minutes, which went wide.

The draw at Education City Stadium was yet another early World Cup match with the favored team stumbling, mostly with the Asian teams getting involved. Argentina and Germany both lost their opening matches against Saudi Arabia and Japan respectively.

South Korea will next play Ghana on Monday and Uruguay are to meet Portugal in the same day's later fixture. 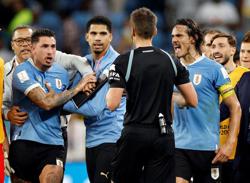