FILE PHOTO: A man kneels at the Lion Statue of Kanjuruhan Stadium as he pays his condolences for the victims of a riot and stampede following a soccer match between Arema vs Persebaya Surabaya in Malang, East Java province, Indonesia, October 4, 2022, in this photo taken by Antara Foto. Antara Foto/Zabur Karuru/ via REUTERS

JAKARTA (Reuters) - Indonesian police firing tear gas was the main trigger for a deadly soccer stampede at a stadium in East Java last month, the country's human rights commission found in a report on the incident released on Wednesday.Officials from the human rights commission (Komnas HAM) said 135 people had died in the stampede, mostly from asphyxiation, after the match at Kanjuruhan stadium on Oct. 1.

Indonesian authorities and the Indonesian football Association (PSSI) have faced questions and criticism in recent weeks over why police fired tear gas inside the stadium, a crowd control measure banned by world soccer governing body FIFA.

Komnas HAM echoed similar conclusions made last month by a government fact-finding team, which found multiple factors like the excessive use of tear gas, locked doors, an overcapacity stadium and failure to properly implement safety procedures exacerbated the deadly crush.

Komnas HAM commissioners specified seven violations human rights in one of the world's worst stadium disasters, including the excessive use of force and violation of children's rights. 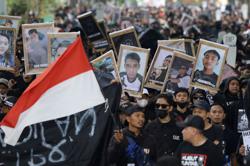