NAIROBI (Reuters) - Satellite images show the mobilisation this month of military forces in towns on either side of Ethiopia's northern border with Eritrea, a private U.S. company said on Wednesday.

Reuters could not independently verify the contents of the images showing reported military activity in the aftermath of the breakdown on Aug. 24 of a five-month ceasefire in Ethiopia's Tigray region.

Tigray forces have battled Ethiopia's federal army and its allies, including Eritrean troops and fighters from neighbouring Ethiopian regions, over the course of a nearly two-year war.

Images collected on Sept. 26 show military forces, vehicles and artillery positions in the town of Shiraro, near Tigray's northern border with Eritrea, according to Maxar Technologies Inc, which collects and publishes satellite imagery of the region.

The images from Eritrea were taken on Sept. 19 and show the deployment of heavy weaponry in the town of Serha, near the Tigray border, Maxar said.

Most communications to Tigray have been down for more than a year.

Tigray forces said on Sept. 13 that Eritrean troops, fighting alongside Ethiopian soldiers, had at one point taken control of Shiraro since fighting had resumed but suggested they had since been beaten back.

They have also accused Eritrea of shelling Tigrayan towns from its territory in recent weeks.

The Ethiopian and Eritrean authorities have not responded to requests for comment about the recent fighting.

Eritrean troops supported the Ethiopean military in earlier phases of the war. The Eritrean government has not confirmed its participation in fighting since the ceasefire broke down, but said earlier this month that some reservists had been called up for military service.

Ethiopian government spokesperson Legesse Tulu, military spokesperson Colonel Getnet Adane and the prime minister's spokesperson Billene Seyoum did not immediately respond to requests for comment about the images on Wednesday. 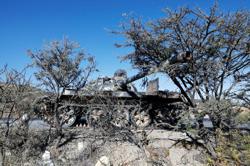