FILE PHOTO: A service member of the self-proclaimed Luhansk People's Republic (LPR) walks with his rifle after voting during a referendum on joining LPR to Russia, at a military facility in Luhansk, Ukraine September 23, 2022. REUTERS/Alexander Ermochenko

BERLIN (Reuters) - The leaders of the Group of Seven leading industrial democracies, condemned , saying it was an attempt by Moscow to create a "phony" pretext for changing the status of Ukrainian sovereign territory.

Russia launched referendums on Friday aimed at annexing four occupied regions of Ukraine, raising the stakes of the seven-month-old war in what Kyiv called a sham that saw residents threatened with punishment if they did not vote. 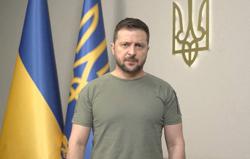