By Katharine Houreld and Duncan Miriri 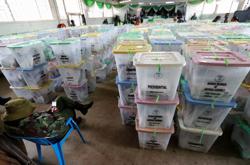 NAIROBI (Reuters) -Without providing any proof, the secretary-general of Kenya's governing party has said there was election rigging, fuelling public anxiety on Friday as media outlets significantly slowed down their unofficial tallies from Tuesday's tight vote.

Only the electoral commission is authorised to declare a winner, but the tallies done by media were seen as a bulwark against the kind of rigging allegations that have previously sparked violence.

While Kenya is East Africa's richest and most stable nation it also has a history of violent elections disputes. More than 1,200 people were killed after the 2007 elections and more than 100 after the 2017 elections.

The race is to succeed President Uhuru Kenyatta, who must step down after serving the maximum two five-year terms. Leading contenders are former political prisoner and veteran opposition leader Raila Odinga and Deputy President William Ruto. Kenyatta has fallen out with Ruto and endorsed Odinga.

Media tallies, which had nearly stopped by Friday morning, showed Odinga and Ruto neck and neck, just under the 50% mark they needed to win. Less than a percent was divided between two other marginal candidates.

If no candidate wins more than 50% plus one vote, the two frontrunners will have a run-off.

On Friday the election commission chairman Wafula Chebukati blamed party agents for the slow pace of the official count, which has not yet topped 1.5% of the vote.

“Agents in this exercise cannot proceed in the manner which we are proceeding, as if we are doing a forensic audit,” he told a news briefing at the tallying centre.

“We are not moving as fast as we should. This exercise needs to be concluded as soon as possible.”

Late on Thursday, the chairman of Kenyatta's Jubilee party, which has backed Odinga, issued a statement alleging "massive subtle rigging" and claiming the "electoral process was highly compromised" after Ruto's new party made a strong showing in an area traditionally dominated by Kenyatta.

The statement alleged voter intimidation, bribery, illegal displaying of campaign materials in polling station, mishandling of party agents and incorrect use of election materials. It provided no evidence and did not explain why the allegations had been made so late. Reuters could not reach party officials for comment.

International observers have generally praised the proceedings in the elections.

Previous elections have largely been determined by ethnic voting blocs. But Ruto has sought to make this election about economics, portraying himself as a self-made "hustler" in contrast to political "dynasties". Odinga and Kenyatta are the sons of Kenya's first vice president and president, respectively.

"We are in darkness and this is not good for us. People are anxious and need to have a clear picture," he said. "There are allegations of rigging flying in social media, but many people are waiting to hear from Raila Odinga or William Ruto. Their word will influence people's reaction."

The electoral commission is the only body legally authorised to declare a winner. It initially uploaded images of results forms from more than 46,000 polling stations, but had not tallied them. Instead, media houses employed teams to download forms and enter them into a database.

More than 99.7% of polling station results are in but thousands have not been counted by the media. The abrupt slowdown started when around 80% of the vote had been counted.

Prominent Kenyan columnist and cartoonist Patrick Gathara criticised the slowdown, tweeting: "So once again KE media have chickened out and have stopped updating their counts? It was too good to last."

"Now we have about a third of people working that we started with and we intend to pick up pace in the next few hours when the rest of the team come back," said Linus Kaikai, director of strategy at Citizen.

Stephen Gitagama, the CEO of Nation Media group, said his staff also needed a rest and that they focused on quality control. He referred Reuters to the election commission, known as the IEBC.

"IEBC bears the responsibility of providing the results, not the media," he said.

On Friday morning, the election commission displayed an official count of presidential results on a board at the main tallying center. It had counted 1.5% of the vote.

The commission has seven days to announce a winner. 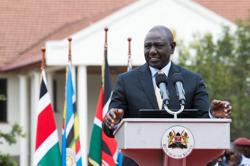