The charges were related to comments made by Khan adviser Shahbaz Gill and aired on ARY TV on Monday night, which the minister, Rana Sanaullah, said was a planned move to malign the military.

He said the accused would face sedition charges for inciting mutiny in the military. "We've set up a special team to probe it," he told reporters in Islamabad, adding, "It was a planned move to malign our institutions."

The arrests came late on Tuesday and early on Wednesday, a day after a state-run media regulator said in a statement that it had ordered ARY News to be taken off air for airing "false, hateful and seditious" content.

"Can such shameful acts take place in any democracy?" he said in a tweet.

Gill had said in the TV appearance that there were attempts to create hatred against Khan's Pakistan Tehreek-e-Insaf (PTI) party among the middle and lower ranks of the military, whom he said loved the party.

The TV channel's owner, Salman Iqbal, said in a tweet that the comments were Gill's personal opinion, which his media house had nothing to do with.

Both Khan's party and the media house were considered pro-military until he was ousted in a confidence vote in April by an opposition alliance.

Analysts say Khan, who was brought to power in a 2018 election with the military's support, had fallen out with the powerful generals in his final months in office.

Both Khan and the military deny that. 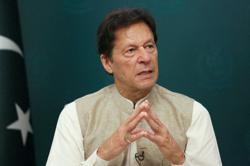