Ukraine's economy to shrink by at least 35 pct this year: PM 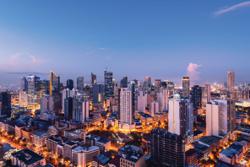 While addressing the Ukraine Recovery Conference in Switzerland, Shmyhal said that the Ukrainian economy has started recovering from the "shock coma" of the first weeks of the conflict.

The government carried out a "relatively successful" grain sowing campaign and resumed logistics across the western border, Shmyhal said, noting that the economy still faces many challenges.

According to the State Statistics Service, Ukraine's GDP contracted 15.1 percent year on year in January-March 2022.

According to the estimates of the National Bank of Ukraine, in the second half of the year the rate of economic contraction will be lower, but in general, Ukraine's real GDP will decrease by more than 30 percent over the course of the year.