By Gram Slattery and Ricardo Brito 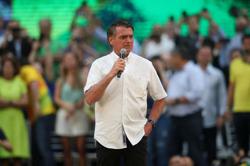 RIO DE JANEIRO (Reuters) - Brazilian President Jair Bolsonaro, a far-right former army captain with a history of misogynistic comments, has a female voter problem that could cost him in October elections. And it just got worse.

Pedro Guimaraes, a staunch political ally and the head of state bank Caixia Economica Federal, resigned on Wednesday under pressure over allegations of sexual harassment that he denies.

The scandal has put an unwanted spotlight on a weak spot for Bolsonaro, who got about half the female vote when he won election in 2018 but is now almost 30 percentage points behind his main left-wing rival, Luiz Inacio Lula da Silva, in polls of women voters.

Guimaraes resigned after news site Metropoles published accounts of five women who described a range of inappropriate incidents ranging from groping to an after-hours sauna invite. Federal prosecutors are now investigating, a source with knowledge of the matter told Reuters.

It remains to be seen how much damage the Guimaraes episode will do to Bolsonaro's re-election hopes as he battles to claw back Lula's double-digit lead in the polls.

But Guimaraes' exit underlines the struggles of an administration that analysts, detractors and even some allies say has been flippant about women's concerns.

Bolsonaro recoils against feminism and was the target of a social media campaign under the hashtag #EleNao, roughly #NotHim, during the 2018 election. He once said an opposition lawmaker did not deserve to be raped by him, and this week he lost a defamation case against a journalist after insinuating she traded sex for information.

Over the weekend, Bolsonaro disappointed allies by announcing a retired military general, Walter Braga Netto, as his running mate instead of a woman.

There are signs Bolsonaro realized the potential damage of the Guimaraes scandal. He immediately tapped Daniella Marques, an economy ministry official, to take over from Guimaraes.

But campaign insiders fear Bolsonaro's rivals will jump on the debacle to further erode his female support, a separate government source said.

"Even if you look into the regions of the country where Bolsonaro is quite strong, you can see that Bolsonaro is losing among women," said Lucas de Aragao, a political analyst at Arko Advice. The Guimaraes scandal was "yet another piece of information that generates negative news flow," he added.

The president's office didn't respond to requests for comment, nor did Caixa. The federal prosecutor's office said it couldn't comment on a "confidential" probe.

In an Instagram post, Guimaraes said the allegations against him were untrue and that he had worked hard to create the conditions for gender equality at the bank.

Bolsonaro fared relatively well among women in the 2018 election, but his female support has since collapsed.

"According to the polls, women don't vote for me," Bolsonaro said in February. "Most of them vote for the left."

In addition to fatigue over sexist comments, Bolsonaro's erratic management of the COVID-19 pandemic may have turned off women, said Aragao. Polling has shown Brazilian women consistently give more weight to health-related issues than men, he said.

Moreover, Bolsonaro's scandal-plagued administration has lost support among evangelical supporters, a key support base that is primarily female, Aragao added.

At a demonstration outside Caixa's headquarters on Wednesday, some protesters said the scandal was par for the course in Bolsonaro's administration.

"It doesn't surprise us that such serious cases (of sexual harassment) are coming out of this government," said union official Rachel Weber. 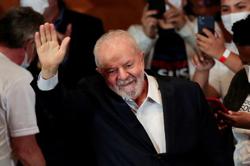 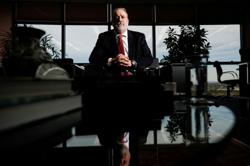