PARIS, May 28 (Xinhua) -- Vinicius Junior scored a winner in the second half to fire Real Madrid to a record-extending 14th UEFA Champions League title as the Spanish giants beat Liverpool 1-0 in a delayed final on Saturday.

The Brazilian winger capitalized on Federico Valverde's cross in the 59th minute to tap the ball into an empty net.

Madrid's last Champions League title was in 2018, when they also beat Liverpool in the final.

The final, which was initially scheduled at 9:00 pm local time, was delayed for 36 minutes due to "security issue". French police said in a statement that a group of supporters without tickets had attempted to "penetrate the stadium", causing chaos outside the Stade de France. 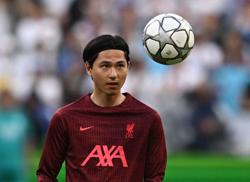