Ousted Pakistani Prime Minister Imran Khan gestures as he travels on a vehicle to lead a protest march in Islamabad, Pakistan May 26, 2022. REUTERS/Akhtar Soomro

ISLAMABAD (Reuters) -Pakistan's ousted prime minister Imran Khan disbanded a protest march by supporters on Thursday after clashes with police outside parliament, but threatened that they would return unless an election was called within six days.

Khan had rallied thousands of supporters to Islamabad, with plans to occupy sensitive parts of the capital until Prime Minister Shehbaz Sharif gave in to his demand for new polls, but Khan told his followers on Thursday morning to step back, while delivering a fresh ultimatum. 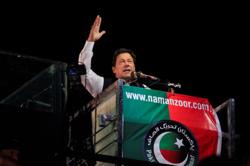