By Daren Butler and Maya Gebeily 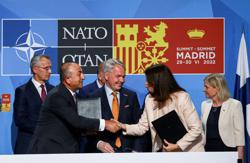 ISTANBUL (Reuters) - President Tayyip Erdogan's pledge to carry out a new military incursion on Turkey's southern borders has triggered speculation about potential targets, with the Syrian town of Tal Rifaat emerging as a primary goal of any operation.

Two days after Erdogan announced the plan, the pro-government Yeni Safak newspaper said on Wednesday preparations had been made for a new operation to expand "safe zones" already set up in northern Syria, with several goals identified.

"Among the probable targets of the Turkish Armed forces and the (Turkey-backed) Syrian National Army, are Tal Rifaat, Ain al Arab (Kobani), Ain Issa and Manbij," the paper said.

Turkish control of the towns, which lie on or close to a central stretch of the 911-km-long border with Syria, could extend and deepen its military presence from near the Mediterranean coast along nearly three-quarters of the frontier.

So far, there have been few signs of military movements that preceded Turkey's last four incursions into northern Syria. Erdogan has said decisions on military operations would be made at a National Security Council meeting on Thursday.

The potential target areas are controlled by the U.S.-backed YPG, which Ankara views as an extension of the PKK, a Kurdish militant group waging an insurgency in southeast Turkey since 1984. Turkey designates both as terrorist organisations.

The YPG has been the main target of several incursions which Turkey has carried out in northern Syria since 2016, seizing hundreds of kilometres of land and pushing some 30 km (20 miles) deep into the country.

YPG spokesman Nuri Mahmoud told Reuters the group took Erdogan's threats very seriously: "The international coalition, America, and Russia should commit to the pledges that they made to this region. Their presence in our areas must be meaningful, in the sense that it stops the repeated attacks on our people."

The Yeni Safak newspaper said the most critical target of the latest operation would be Tal Rifaat, some 15 km (9 miles) from the Turkish border, which it said Kurdish fighters used as a base from which to launch attacks in the Afrin, Azaz and Jarablus areas controlled by Turkey and Ankara-backed Syrian fighters.

Tal Rifaat is located north of Aleppo city and just south of Azaz. An operation there alone would not represent a widening of Turkey's "safe zones" along the border, but would push its forces deeper into Syria.

Dareen Khalifa, an analyst on Syria at the International Crisis Group, said it was unclear whether Erdogan was talking about an operation in Tal Rifaat or further east, but she highlighted the role of the town.

"Tal Rifaat, if anything, can get him what he wants and it would avoid triggering a huge headache. I don't think the Americans care about Tal Rifaat," she said.

Most U.S. forces in northern Syria are based further east.

She said Russia, which has forces deployed in the region, had not been addressing his concerns on militant attacks on Turkish-controlled areas from Tal Rifaat, and that Erdogan has been saying for years that Tal Rifaat needs to be captured.

The predominantly Kurdish town of Kobani was touted as another potential target. The YPG's defeat of Islamic State militants there in 2015 helped turn the tide against the group.

"Kobani represents the value of a global victory in the war against terrorism," YPG spokesman Mahmoud said. "There's no doubt that our forces will do what is needed to defend" the area.

The YPG, or People's Defence Units, are a key element of the Syrian Democratic Forces (SDF), the coalition which the United States largely relied on to fight Islamic State.

However, Khalifa played down the prospects of Turkey targeting Kobani.

"I don't think there's any interest in getting stuck in Kobani," she said, pointing to the major demographic changes and reaction that would ensue if the Kurdish population fled.

She said that while United States forces were not in Manbij physically, it is a U.S. zone of influence, so "I expect it to also trigger a U.S. reaction".

Any attack on Kobani would also risk triggering a strong reaction from Turkey's Kurds, who make up some 20% of the country's population. The Islamic State attack on Kobani in 2014 led to protests in which dozens died in Turkey.

"We must all see that this will lead again to a bloody vortex in this region and country," he told HDP lawmakers.

Erdogan's talk of a military operation has also raised the stakes in Turkey's row with NATO partners over Finland and Sweden joining the alliance, with Turkey accusing both of harbouring people linked to the PKK.

Analysts said the incursion plans reflected his belief that the West would not oppose such operations when it needs Ankara's support for the Nordic countries' bid to join NATO.

Erdogan's announcement was also aimed at bolstering nationalist support as he gears up for difficult elections next year, analysts said. Cross-border military operations have boosted his poll ratings in the past. 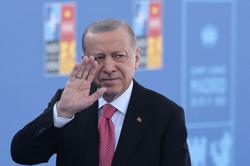