BERLIN (Reuters) -The European Union is looking into ways of using the frozen assets of Russian oligarchs to fund the reconstruction of Ukraine after the war, European Commission President Ursula von der Leyen said on Thursday.

The commission proposed on Wednesday a 9 billion euro loan to Ukraine to keep the country going as it struggles to fend off the Russian invasion and wants to set up a reconstruction facility for after the war. 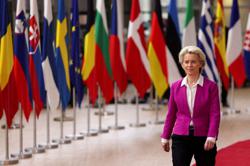