PARIS, April 14 (Xinhua) -- The official selection for the 75th edition of the Cannes Film Festival was announced on Thursday during a press conference in Paris, with 18 films selected to compete for the Palme d'Or.

The films include Les Amandiers by Valeria Bruni Tedeschi, Close by Lukas Dhont, Crimes of the Future by David Cronenberg, Decision to Leave by Park Chan-wook, and Showing Up by Kelly Reichardt. 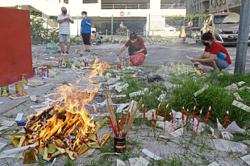