(Reuters) - Lebanese President Michel Aoun on Friday sent a law amending legislative election rules back to parliament for reconsideration, the presidency said in a statement.

The development could affect Lebanon's ability to hold an election on the March 27 date agreed to this week.

Lebanon's parliament had voted on Tuesday to hold an election at that time, giving Prime Minister Najib Mikati's government only a few months to try to secure an IMF recovery plan amid a deepening economic meltdown.

"The new amendments to the electoral law went beyond being just a recommendation," President Aoun said in the statement.

"Shortening the constitutional deadline that comes ahead of the elections exposes the electoral process to the voters absence due to climate and logistical reasons," Aoun added. 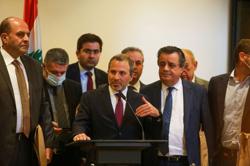