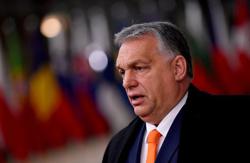 The tight race between Dobrev, a 49-year-old lawyer and economist, whose candidacy would raise the prospect of Hungary's first female prime minister, and Marki-Zay, a small-town mayor with no party affiliation, has mobilised hundreds of thousands of voters tired of Orban's nationalist government which has been in power since 2010.

Orban will, for the first time, face a united front of diverse opposition parties in 2022 that includes the Democratic Coalition, the Socialists, liberals and the formerly far-right - and now centre-right - Jobbik. Polls show Orban's ruling Fidesz party and the opposition alliance running neck-and-neck.

During weeks of campaigning, both Dobrev, the Democratic Coalition's candidate, and Marki-Zay have toured the countryside, with activists going to towns and villages where Fidesz has been traditionally strong -- and often perceived as the only choice -- in the past decade.

"This is a new situation that the opposition's troops are basically lined up for battle six months before the elections," said Robert Laszlo, an analyst at think-tank Political Capital.

Opposition parties now have a single joint candidate against Fidesz in each of Hungary's 106 constituencies. Dobrev won the first round of the primary with 34.8% of votes, but the race with Marki-Zay -- who came in third with just over 20% -- is tight after runner-up Budapest mayor Gergely Karacsony withdrew and backed Marki-Zay last week.

The preliminary results of the contest are expected on Sunday evening.

Born in the southern town of Hodmezovasarhely, 49-year-old Catholic Marki-Zay, who has seven children and degrees in economics and engineering, rose to prominence when he won a 2018 mayoral contest in his hometown, taking over a Fidesz stronghold.

His family-man and outsider could appeal to undecided voters and those in the countryside. His candidacy would also upset Fidesz' strategy to vilify the opposition as puppets of former Socialist Prime Minister Ferenc Gyurcsany, one of the most divisive figures in Hungarian politics.

Marki-Zay has campaigned on leading a coalition of "the clean", promising to root out corruption and ending 30 years of deep divisions in politics and society.

Similarly to Dobrev, he is committed to Hungary's European Union membership and the introduction of the euro. Orban has clashed repeatedly with the EU over issues such as democratic standards and gay and transgender rights.

Dobrev, who is vice president of the European Parliament, has promised to raise taxes for the rich and reduce a widening wealth gap.

Her main advantage is her highly competent image. Her main drawback: her husband, Gyurcsany, who admitted in 2006 in a leaked speech that he lied about the economy to win elections.

"As a Social Democrat, I can tell you that this country from 2022 needs just, progressive, leftist policies or those millions who can hardly make ends meet at the end of the month will not be able to cope," she told supporters in the town of Veszprem on Thursday.

(Reporting by Krisztina Than)