By Daniel Ramos and Monica Machicao 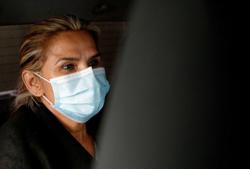 FILE PHOTO: Demonstrators run from police officers during a protest by coca producers for control of the coca market, in La Paz, Bolivia September 27, 2021. REUTERS/Claudia Morales

LA PAZ (Reuters) - Bolivia's coca farmers are battling for control of the leaf's main market in the highland city of La Paz, a conflict which has seen producers and police clash in the streets with slingshots and tear gas, and even a building set on fire.

Coca growers from the nearby Yungas region are at odds over the leadership of the body that runs the huge market for coca, the raw ingredient for cocaine, but which many in the Andes chew to ward off the effects of high altitude or brew into teas.

Protests on Monday led to a fire breaking out in an apartment building near where protesters and police were clashing, with both sides blaming each other. Last week, a number of police vehicles were set alight during similar process.

Two cliques have formed. One around the government-backed head of the coca management body Adepcoca, Arnold Alanes, while others have rallied behind government critic Armin Lluta who says the ruling party - and former president Evo Morales - is trying to seize greater control of the trade.

"Evo Morales... wants to form a great national confederation of coca leaf producers, he wants to be the leader of the Chapare and the Yungas," Lluta told reporters, referring to the two main coca growing regions.

The Yungas region produces and trades some $200 million of coca a year in the local market, according to estimates by the U.N. Office on Drugs and Crime, which has said that most Bolivian coca is not traded in approved markets.

Alanes told a group of coca growers on Tuesday that he had been elected to his position by farmers themselves and said that the criticism against him was because he was trying to stamp out corruption in the market.

"The crime of Arnold Alanes is to propose the systematization of Adepcoca's economic income. Arnold Alanes' crime is to prevent and eradicate corruption," he said.

Augusta Colpa, a coca grower, said that conditions were tough for farmers which were stoking unrest.

"How much do we harvest from a coca plot? In cold weather we don't harvest much. ... It's not enough for our family," she said, denying police accusations farmers were throwing dynamite in the protests.

Ronald Lopez, a coca farming leader, said during protests that have hit the city over the last week that the Yungas groups hoped for dialogue with the government towards installing a new head of Adepcoca.

"We put this government in power, with our struggle and fighting," he said. "Brothers, you can't treat us like this." 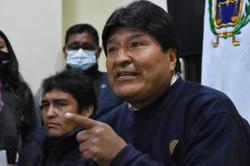