LAGOS (Reuters) - Armed men killed at least 34 people in two villages in the northern Nigerian state of Kaduna in the early hours of Monday, the state government and two residents said.

The Kaduna government said in a statement that 34 people were killed in the village of Madamai. One resident, speaking by phone, said he counted 44 corpses in the local mortuary from attacks on Madamai an neighbouring Abum village. Another local resident said around 30 people had died.

The government statement said security forces who had gone to the scene came under fire but forced attackers to withdraw after an intense exchange. Two suspects had been arrested in connection with the attack, it said.

Wielding guns and machetes, the men entered the Madamai and Abum on foot around 1 or 2 a.m., said resident Bobby Gwaza.

"The men came and killed my wife and four of my sisters," he said, and provided photographs of corpses he said were discovered later on Monday.

Reuters was unable to independently verify the images.

The attackers, whose numbers were obscured in the night, burned down many houses and sent most residents fleeing before leaving after about an hour without meeting any resistance from Nigerian law enforcement or security forces, Gwaza said.

He said he did not know why the men attacked Madamai, but that it was not the first time. 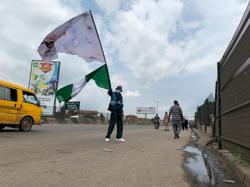