How politicians reacted after exit polls from Germany's election "This is going to be a long election evening, that is certain. But it is also certain that many put their cross by the SPD because they want the next Chancellor of Germany to be called Olaf Scholz.

"Lets wait for the final result, and then we'll get to work."

"We are ahead in all the surveys now," Scholz later said in a round table discussion with other candidates after the vote.

"It is an encouraging message and a clear mandate to make sure that we get a good, pragmatic government for Germany."

"It was clear to us that without incumbent's bonus it would be a more open, a tighter and a tougher election campaign. This is a neck and neck race.

"We will do everything to form a conservative-led government, because Germany needs a future-oriented coalition that modernizes our country.

"This is not about getting an arithmetic majority but bringing together different political positions to make a coalition. I am ready for that. I want (a coalition) in which every partner is visible."

JOE BIDEN, U.S. PRESIDENT, ON BEING TOLD THE SPD WERE AHEAD IN POLLS:

"This is a spectacular success. This demonstrates citizens' faith in Olaf Scholz... The SPD is back, we are in our place again."

"We wanted more. We didn't manage that, partly because of mistakes at the start of the campaign - mistakes I made.

"It makes sense that different parties talk to each other in different combinations.

"We were elected by very many young people in this country. Among them we are the clear leading force.

"We need massive investment in our country. Our suggestion is to expand debt break with an investment rule so that investment can take place."

"The election result is not easy to read. None of the former popular parties has more than 25-26% of the vote. So 75% of Germans didn't vote for the party that will provide the next chancellor. Perhaps the Greens and the FDP should talk to each other first.

"The biggest policy overlap is between the conservative bloc and the FDP. For us, the ideas of tax hikes, of softening the debt brake are not acceptable."

"That hurts... It's clear: the losses are raw, they are bitter. But we have a credo in the CDU - first the country, then the party. According to the numbers we have now there is a possibility for a future-oriented coalition of CDU/CSU, FDP and Green that stands for stability, security and climate protection."

"(Chancellor candidate) Armin Laschet is standing there with a result that is a historic catastrophe for the CDU." 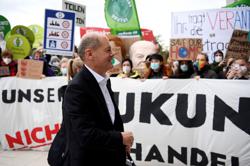 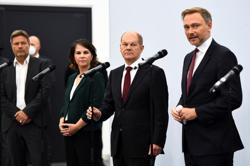