U.S. President Joe Biden speaks during the 76th Session of the General Assembly at UN Headquarters in New York on September 21, 2021. Timothy A. Clary/Pool via REUTERS

(Reuters) -U.S. President Joe Biden told the United Nations General Assembly on Tuesday he would work with Congress to double funds by 2024 to $11.4 billion per year to help developing nations deal with climate change.

The funding would help achieve a global goal set more than a decade ago of $100 billion per year to support climate action in vulnerable countries.

"The best part is, making these ambitious investments isn't just good climate policy, it's a chance for each of our countries to invest in ourselves and our own future," Biden told the annual gathering of world leaders.

Biden made the commitment less than six weeks before the Oct. 31-Nov. 12 COP26 Climate Change Conference in Glasgow, Scotland. Core elements of his climate change agenda remain tied to the fate of infrastructure and budget legislation under intense negotiation in Congress.

The host of the conference, British Prime Minister Boris Johnson, said that meeting the climate finance target is key to building trust between developing and developed nations ahead of new negotiations since developed countries have failed to mobilize the $100 billion per year pledge by the original goal year of 2020.

Johnson and European Commission President Ursula van der Leyen called out the United states on Monday for lagging behind on delivering its share.

A report released last week - ahead of the Biden announcement - by the Organisation for Economic Cooperation and Development said that rich countries likely missed the goal last year, increasing funding by less than 2% in 2019.

Some environmental groups welcomed the new pledge as a much needed boost for the Paris climate agreement ahead of November's summit in Scotland.

"Climate finance is a central tenet of the Paris Agreement and the U.S. is taking an important step toward making good on its share of responsibility to meet the $100 billion commitment," said Helen Mountford, vice president for Climate and Economics at the World Resources Institute.

"The US is still woefully short of what it owes and this needs to be increased urgently," said Mohamed Adow, director of Power Shift Africa. 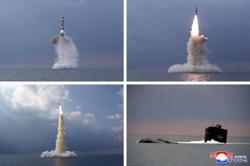