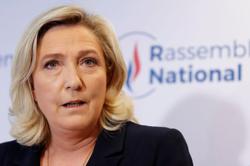 FILE PHOTO: Mayor of Paris Anne Hidalgo applauds as she attends a ceremony with the French Paralympic delegation, in front of the city hall in Paris, France, September 6, 2021. REUTERS/Eric Gaillard

PARIS (Reuters) -Paris Mayor Anne Hidalgo said on Sunday she would run for president in 2022 on a Socialist ticket, though polls indicate she has little chance of mounting a serious challenge unless she can unite the fragmented left.

Hidalgo, who became the first woman to run the French capital in 2014 and is among the few senior left-wing politicians to emerge from President Emmanuel Macron's 2017 redrawing of the political landscape relatively unscathed, is polling at about 8% voter support in April's first round.

Macron and far-right leader Marine Le Pen are currently polling at between 20% and 24%.

"Knowing the seriousness of our times and to give hope to our lives, I have decided to be candidate for the French presidency," the 62-year-old said when she announced her bid in the Normandy city of Rouen.

She promises a greener economy, the re-industrialisation in old manufacturing heartlands, putting citizens front and centre of the European Union and to improve education - but she has yet to put much flesh on the bones of her agenda.

As mayor of Paris, Spain-born Hidalgo has won plaudits for converting the once traffic-choked banks of the river Seine into bustling promenades, for getting tough on polluting vehicles and creating new bike lanes during the COVID-19 crisis.

While her profile has received a boost as Paris takes over as the host of the next Olympic Games, she remains a relative unknown outside the capital's ring-road.

Meanwhile the Socialist Party has struggled to rebuild after Macron, a former banker with little political experience before his election win, blew apart the mainstream parties.

But the left is deeply divided. Earlier this month, former economy minister Arnaud Montebourg said he would run as an independent candidate. The greens, who performed well in municipal elections last year, will also announce a runner in coming weeks. Another two candidates from the far left have also thrown hats in the ring.

Analysts say that any centre-left challenger will need to rally the greens and Socialists behind a single ticket to challenge for a place in the second-round run-off.

Polls currently show Macron and Le Pen as the most likely second round runners.