(Reuters) - Lithuania's interior ministry on Wednesday dismissed Belarusian reports that an Iraqi migrant had been found beaten to death after being turned away at the Lithuanian border, describing it as part of a "hybrid war" being waged by Minsk.

Lithuania has accused Belarus of manufacturing a refugee problem on its border in retaliation for European Union sanctions on President Alexander Lukashenko's government. Belarus denies doing so.

Lithuania has reported a surge in illegal border crossings from Belarus and accused Minsk of flying in migrants from abroad and sending them across the border.

Belarus announced an investigation into what it said was the death of an unnamed Iraqi migrant. The head of the Belarusian security council, Alexander Volfovich, said the man was beaten so badly that Belarusian border guards were unable to help him.

"This is a method of hybrid war, disinformation. There was no incident on the border this night, no use of power," said a spokeswoman for the Lithuanian Interior ministry.

Lithuania has authorised its border guards to use force if necessary to turn migrants away.

"I would like to mention in the course of those two days, fortunately there were no situations where our border guard officers used any kind of force," Commander of the Lithuanian State Border Guard Service, Rustamas Liubajevas, told Reuters.

Liubajevas said reports of migrants being injured were "fake news" and said he knew about the allegation of the Iraqi migrant's death only from Belarusian media.

The European Union said last week it would consider sanctions against migrant smugglers and those involved in human trafficking to address a surge in "irregular" border crossings from Belarus.

(Reporting by Lewis Macdonald in Gdansk and Tarmo Virki in Tallinn; writing by Matthias Williams,editing by Timothy Heritage) 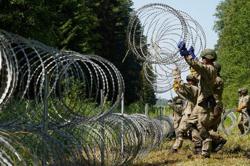