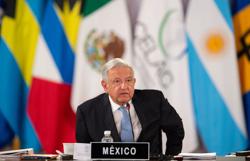 FILE PHOTO: People gather during protests against and in support of the government, amidst the coronavirus disease (COVID-19) outbreak, outside the Capitol building, in Havana, Cuba July 11, 2021. REUTERS/Stringer

MEXICO CITY (Reuters) - Mexican President Andres Manuel Lopez Obrador said Monday that he thinks U.S. President Joe Biden must make a decision about the embargo against Cuba amid the biggest unrest in the Caribbean nation in decades.

Lopez Obrador said it was not enough for countries to vote to end the embargo via the United Nations General Assembly, but that it was time to make a real decision about it, given that "almost all countries of the world" are against it.

"It is not conceivable that in these times they want to punish an independent country with a blockade," Lopez Obrador said.

"I think that President Biden must make a decision about it. It is a respectful call, from no point of view of interference, but we must separate the political from the humanitarian."

Cuban families should also face fewer restrictions on receiving remittances from those who live in the United States or any other country, Lopez Obrador added.

"How can it be blocked if it's not even government money?" Lopez Obrador said.

Remittances to Cuba are believed to be around $2 billion to $3 billion annually, representing its third biggest source of dollars after the services industry and tourism.

The transfers have been slowed by policies brought in under U.S. former President Donald Trump that led Western Union to close Cuban operations.

The Cuban government has blamed the protests mostly on what it calls U.S.-financed "counter-revolutionaries" exploiting economic hardship caused by decades-old U.S. embargo.

Lopez Obrador says the U.S. embargo is a cause of the protests, which erupted amid Cuba's worst economic crisis since the fall of former ally the Soviet Union in the 1990s.

Mexico is due to send food and medical supplies, including syringes, oxygen tanks and masks, to Cuba via cargo ships. 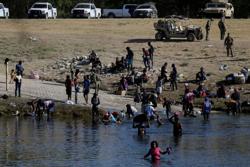