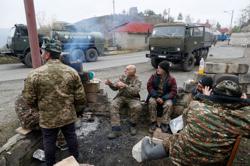 BAKU (Reuters) - Azerbaijan on Friday said an Armenian sniper had killed one of its soldier at the border between the two countries and that its army was taking response measures.

Azerbaijan's defence ministry said in a statement the incident took place at the part of the border formed by its Kalbajar district, part of territory reclaimed by Azerbaijan last November.

Azerbaijan and Armenia fought a six-week war last year in which Azeri troops drove ethnic Armenian forces out of swathes of territory they had long controlled in and around the Nagorno-Karabakh enclave.

The fighting in Nagorno-Karabakh, which is internationally recognised as part of Azerbaijan, ended in a ceasefire brokered by Russia, but clashes on the border have persisted at irregular intervals this year, occasionally causing fatalities.