By Cooper Inveen and Ngouda Dione

DAKAR (Reuters) - Dangling from umber cliffs that tower over Africa's westernmost shoreline, a crew of Senegalese climbers hunt for footholds that they say are vanishing.

Rock climbing falls behind wrestling, football and surfing as well-loved Senegalese pastimes, but it has bound together a small community of locals and expats who say that their sport is under threat.

The issue: coastal erosion caused by a massive construction boom in the capital Dakar where luxury hotels and condominiums are being built close to a once-untouched shoreline, eating away at the land and eroding the well worn climbing routes.

Bits of hard cliff are quickly turning into slopes of scree; footholds and places to latch a rope are being lost.

"It's kind of sad, due to the fact that it's really a place where you can get rid of all the stress from Dakar, all the noises and everything," aid Abasse Wane, who has been climbing the cliffs above Dakar's Mamelles beach for several years.

Waiting at the summit after each climb is no longer a clean park with a pleasant view of Dakar's Mamelles lighthouse that for 150 years has kept ships away from the reef below. These days, it's a dusty construction site littered with medical waste from a nearby hospital.

"This is a beautiful spot to climb, and the opportunity for Senegalese climbers to be seen ... is definitely not going to happen if we don't have access," he said, next to some construction debris that was dumped over the edge of the cliff.

Erosion costs Senegal's government more than $537 million a year, primarily due to the loss of high-value urban land, according to a 2019 World Bank study.

That's more than double what Benin loses, despite it having the region's worst coastal erosion in terms of land volume lost.

Geologist Pape Goumbo Lo, who heads Senegal's national scientific research institute, worries that if something isn't done soon, the cliffs and the lighthouse may crumble into the sea.

"We need to protect Mamelles urgently. It's historical, it's touristic, it's ecological and it's strategic."

One recent evening, climbers found an injured hawk nestled into the cliffside, unable to fly. They took the bird in and two weeks later it was flying again.

"This is our main goal," said Daouda Diallo, a regular at the rock wall. "To protect this area for the coming generation." 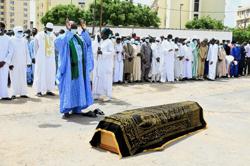