FILE PHOTO: A passenger wearing a protective mask is pictured after arriving at Birmingham Airport following the outbreak of the coronavirus disease (COVID-19) in Birmingham, Britain July 27, 2020. REUTERS/Phil Noble

(Reuters) - Fully vaccinated travellers arriving from countries on Britain's "amber list" are set to avoid quarantine from as early as July 19, British media reported on Tuesday, as airlines prepared to check vaccine status on flights into Britain for the first time.

British ministers will meet this week to sign off a policy that will allow people to travel from amber destinations without isolating for up to 10 days, The Times newspaper reported.

At present, travellers arriving from a country on the amber list are required to isolate on arrival.

Transport Secretary Grant Shapps will unveil the rules change on Thursday, according to The Sun, which also reported that travellers must take a test before they come back to Britain and another gold standard PCR test on the second day of return.

British Prime Minister Boris Johnson set out plans on Monday for the final step in easing England's COVID-19 lockdown, including the removal of laws governing social distancing and face coverings, and an end to official advice to work from home.

ABTA, the UK industry body representing 4,300 travel brands, has urged the government to make good on proposals to relax quarantine rules for fully vaccinated individuals visiting countries on the amber list like Spain and France.

As of the end of Monday, 86.2% of British adults had received one dose of a vaccination against COVID-19 and 64.3% had received two doses.

(Reporting by Kanishka Singh in Bengaluru; Editing by Sandra Maler) 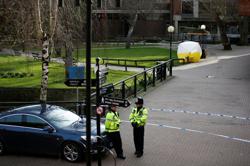