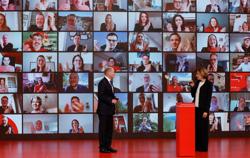 FILE PHOTO: German Christian Democratic Union Party Leader Armin Laschet briefs the media after a meeting of the party's board at the headquarters in Berlin, Germany, April 12, 2021. Markus Schreiber/Pool via Reuters/File Photo

Ahead of the meeting, Markus Soeder, Laschet's Bavarian rival for the conservative candidacy, said it was up to the CDU to decide which of them should run as their bloc's candidate for chancellor, and that he would accept a decision for his rival.

The vote takes Laschet one step closer to succeeding Chancellor Angela Merkel, who has been in power for 16 years and is stepping down after September's election.

Following are key facts about Laschet:

* Premier of North Rhine-Westphalia since 2017, he rules the state, Germany's most populous region, in coalition with the liberal Free Democrats (FDP), the preferred coalition partner at federal level for the CDU/CSU alliance, dubbed the 'Union'.

* A Roman Catholic of Belgian heritage, 60-year-old Laschet is a fluent French speaker and the son of a mining engineer. He resisted early efforts to curb coal production. Laschet earned a law degree and worked as a journalist before entering politics.

* Merkel said last year he had "the tools" to lead Europe's biggest economy and most populous country, but voters find him uninspiring.

* In January, centrist Laschet won the CDU leadership, narrowly beating arch-conservative Friedrich Merz in a run-off vote of party delegates. He positioned himself as the man to heal party divisions.

* After initially resisting tougher restrictions to suppress the spread of COVID-19, Laschet flipped earlier this month and pushed for a "bridge lockdown" until vaccinations are ramped up.

* In North Rhine-Westphalia, he is known for his good relations with the immigrant community, earning him the nickname "Turkish Armin". He strongly supported Merkel's open door migrant policy during Europe's 2015 refugee crisis.

* A champion of European integration, Laschet met Emmanuel Macron at the French president's office last year and in an honour reserved for special guests, Macron invited him into the Elysee gardens. At the Munich Security Conference last year, Laschet apologised on behalf of the German government for taking "too long to react" to French calls for EU reform.

* He supports the Nord Stream 2 gas pipeline from Russia to Europe. In an interview with Reuters in February, Laschet said that "feel-good moralising and domestic slogans are not foreign policy."