By Toby Sterling and Hilde Verweij The Urban Sun, an art project launched by Dutch designer Daan Roosegaarde is seen on a square in Rotterdam, amid the coronavirus disease (COVID-19) outbreak in the Netherlands January 27, 2021. Picture taken January 27, 2021. REUTERS/Hilde Verweij NO RESALES. NO ARCHIVES

ROTTERDAM (Reuters) - A group of actors dance in a ring of ultraviolet light projected onto a square in Rotterdam from a glowing black orb suspended above them. Able to forget the pandemic for a short while, they wear no face masks and do not observe social distancing rules.

Dutch designer Daan Roosegaarde's "Urban Sun" installation seeks to harness ultraviolet light to reduce the amount of coronavirus in the air in busy spaces and lessen the risk of transmission.

"This is not instead of a vaccine or the government rules, it's an extra barrier, an extra safe zone for schools, hospitals, train stations," said Roosegaarde.

The pandemic has led to a boom in interest in UVC, or ultraviolet light in wavelengths of less than 280 nanometres, an effective killer of the coronavirus and other viruses.

Commercial manufacturers do not recommend that people be directly exposed to UVC due to worries that it may harm skin or eyes, so the actors involved in the project are only exposed to the light for a few minutes at a stretch.

Roosegaarde, who blends science and design in his projects, created the Urban Sun after studies that suggested ultraviolet light in the 222 wavelength, slightly less than the industry standard, is generally safe.

His concept is to use visible light, shining above the black orb, to illustrate where the invisible ultraviolet light is present: directly underneath. The effect is a little like an eclipse.

Roosegaarde, who has briefly shown the installation twice in Rotterdam, said his hope was "to create places which are safer, instead of being stuck in this Zoom screen all the time".

He hopes to set up his installation at dance festivals in the summer as COVID-19 restrictions ease.

The Netherlands currently bans public gatherings of more than two people, and has a nighttime curfew in place from 9 p.m.

Roosegaarde said his hope was "to create places which are safer, instead of being stuck in this Zoom screen all the time."

Jet Bussemaker, who chairs the Dutch Council of Public Health & Society, said artistic creativity had a role to play during the fight against the pandemic.

"Maybe we also have to create room for experiments, creating room for imagination and not only for the very safe, technical, medical arguments," Bussemaker said.

"It is a very dangerous virus," she added, "but at the same time we have to keep moving on with our lives." 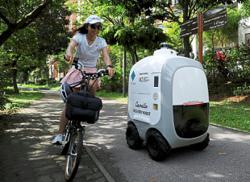