Africa not 'walking away' from AstraZeneca COVID-19 vaccine, CDC says 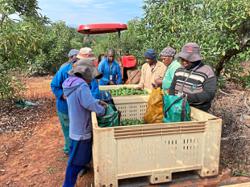 A vial of the AstraZeneca vaccine is seen at a COVID-19 vaccination centre in the Odeon Luxe Cinema in Maidstone, Britain February 10, 2021. REUTERS/Andrew Couldridge

JOHANNESBURG (Reuters) - The African Union's disease control body said on Thursday that it was not "walking away" from AstraZeneca's COVID-19 vaccine, after trial data showed it had greatly reduced efficacy against the coronavirus variant dominant in South Africa.

African countries are due to receive 100 million doses of the AstraZeneca shot this year under an AU vaccine plan.

South Africa has paused the rollout of AstraZeneca shots to health workers and said on Wednesday it could seek to sell or swap doses of the vaccine.

Nkengasong added that six countries other than South Africa had reported the presence of the variant. This has alarmed health experts who have raised concerns about its ability to potentially evade the immune response generated by prior exposure to the coronavirus or vaccines.

"For countries that have not reported the circulation of the 501Y.V2 variant, we recommend that they proceed with the rollout of the AstraZeneca vaccine," Nkengasong said.

Nkengasong said the Africa CDC would be doing its own evaluations of the AstraZeneca vaccine across multiple countries and that no countries had said they would not be using the vaccine.

He added that the AU was in talks with Johnson & Johnson on the supply of more COVID-19 vaccines, beyond the 120 million doses that already feature in its vaccine plan.

Separately, Kenya said it would move ahead with plans to use the AstraZeneca vaccine.