A Turkish Airlines cargo plane loaded with the vaccines landed at Istanbul Airport early in the morning from China's capital Beijing.

After the completion of the customs clearance formalities at the airport, the vaccines were transferred to several warehouses in Istanbul for the necessary security tests, a health ministry official told Xinhua.

The official said the tests will last 14 days, and then the vaccines will be distributed to 81 provinces of the country to be used in the vaccination program.

Turkey launched the mass vaccine campaign on Jan. 14 after receiving the first batch of 3 million doses of COVID-19 vaccines from China at the end of December 2020.

Nurettin Yiyit, chief physician of the Feriha Oz Emergency Hospital in Istanbul, said "if we use our maximum capacity, we are in a position to vaccinate (people) in our country in a short period of time, as long as one month."

The physician also pointed out that the Turkish healthcare professionals always express their confidence in inactive vaccines like the Sinovac's shots.

"There are no serious side effects reported so far," he noted, adding this factor increases the trust of the citizens in the vaccination.

According to the health ministry's data, more than 1.25 million Turkish citizens have been vaccinated so far, and the program is going on as planned.

Also on Monday, Palestinian Prime Minister Mohammed Ishtaye said that Palestine is studying the option of closing its border crossings to limit the spread of the new coronavirus strain.

Ishtaye told the weekly meeting of the Palestinian Authority cabinet held in Ramallah that "Palestine is studying with Jordan and Israel the choice of closing all its border crossings to prevent the spread of the new COVID-19 strain."

Palestine has recently reported 17 cases infected with the new strain.

"Wearing face masks, washing hands, and abiding by social distancing are the only available weapons in our hands until now to combat the spread of the virus before we receive the vaccines soon," Ishtaye said in a press statement.

The Palestinian government in the West Bank, and Hamas movement, which rules the Gaza Strip, have been imposing lockdowns and precautionary measures since last March to prevent the spread of coronavirus.

"The wide commitment to the lockdown measures had led to positive results, and the occupancy rate decreased significantly in the hospitals designated for coronavirus in the Palestinian territories," Ishtaye added.

The ministry reported in a statement seven new deaths, raising the death toll from the infectious virus to 13,000. It also said that 1,585 cases recovered during the day, bringing the total recoveries to 583,127.

Israel's Ministry of Health reported 8,664 new COVID-19 cases on Monday, bringing the total tally in the country to 605,397.

According to the ministry, the number of people vaccinated against the COVID-19 in Israel has surpassed 2.63 million, or 28.3 percent of its total population, since the vaccination campaign began on Dec. 20, 2020.

Firas Abiad, director of Rafic Hariri University Hospital, warned on Monday against easing lockdown measures, which would lead to losing what has been achieved over the past weeks.

The first batch of coronavirus vaccines developed by China's Sinopharm company will arrive in Morocco on Jan. 27.

The Kuwaiti Health Ministry also announced the recovery of 513 more patients, taking the total recoveries to 154,766.

The Omani health ministry announced 209 new COVID-19 infections, raising the total number of confirmed cases in the sultanate to 133,253.

Meanwhile, 72 people recovered during the past 24 hours, taking the overall recoveries to 126,334, while one death was reported, pushing the tally up to 1,522. 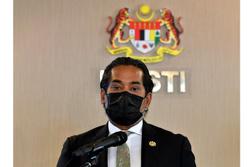