NEW YORK, Jan. 3 (Xinhua) -- An expert has called on the owners of the eateries and nightlife venues in New York City to have more flexibility, together with cash grant from government, in their efforts to make their businesses recover from the 10-month-long COVID-19 pandemic, New York Daily News reported on Sunday.

Even before the coronavirus crisis, it was challenging to operate a successful eatery or nightlife venue in New York City; innovation and creativity have kept a lot of places from closing their doors, and what they need now is flexibility, said Andrew Rigie, executive director of the New York City Hospitality Alliance, which represents nightclub and restaurant owners.

"So much more must be done to give these business owners a fighting chance of survival," Rigie said. "It's not enough to sing the praises of small business. We need concrete action."

Among the ideas Rigie is putting on the menu is a cash grant to restaurants that would be drawn from the sales tax they generate. The businesses would reinvest the money to help pay staff or the cost of retrofitting their restaurants to comply with COVID-19 guidelines.

"It's a quick way for local government to get cash into the pockets of business owners," he said.

Rigie would also like to see some action to stop what he said is the exploitation of restaurants by third-party delivery apps like GrubHub and Uber Eats. Those companies should be transparent with the public about the fees, at least 20 percent to 30 percent for each order, that they are charging the restaurants.

He is also urging congressional lawmakers to get behind the RESTAURANTS Act, which would provide 120 billion U.S. dollars in relief through a grant program administered by the Treasury Department.

"The biggest challenge for the restaurant industry is the rent," Rigie said. "New York City will not recover unless our restaurants and nightlife are at the core of the recovery."

The rate was announced on Jan. 1 to top 9 percent, on Dec. 31 to top 8 percent and on Dec. 27 to top 7 percent. It topped 3 percent in late November, which was believed by the city government to signify the arrival of a second wave of the coronavirus, and has remained above the level ever since.

As of Saturday evening, the coronavirus deaths added up to 25,211 and confirmed cases to 436,581 in NYC, according to The City, a project that tracks the spread of confirmed COVID-19 infections and fatalities in New York City, based on information provided by the New York City Department of Health and Mental Hygiene, the governor's office, The COVID Tracking Project and the Center for Systems Science and Engineering at Johns Hopkins University. 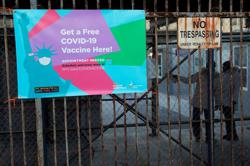 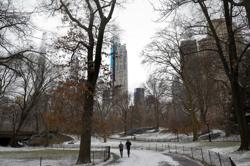