The new minimum wage will take effect on Jan. 1, according to the Government Gazette.

The Economy Ministry based the adjustment on a forecast increase of 5.22 percent in the National Consumer Price Index, which serves as the basis for annual adjustment of the minimum wage.

If the price index exceeds the government's forecast, the minimum wage can be readjusted again, as happened in January of 2020.

Some 49 million workers in Brazil are paid in keeping with the minimum wage, according to data from the Inter-Union Department of Statistics and Socioeconomic Studies. 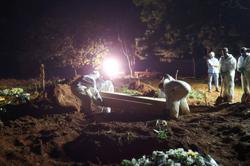