World Children's Day is a global day of action for children and by children, according to the United Nations Children's Fund (UNICEF). This year, amid COVID-19, UNICEF is working globally to "reimagine a future for children where every child's right to health, education, and protection is upheld."

Cities that joined in the lighting event included Beijing, Wuhan, Taiyuan and Changsha.

On Friday night, blue lights shone on the iconic Central Radio and Television Tower, China Millennium Monument, and the China Soong Ching Ling Science and Culture Center for Young People in Beijing. Phrases such as "Lighting up children's future" call for continued attention to children during the pandemic.

"Changsha is a historical and romantic city," said Changsha's deputy mayor Tan Yong. "We hope to paint a safe, convenient, joyful and happy city for children."

In Wuhan, capital of central China's Hubei Province, Li Xinyi and her 4-year-old daughter caught wind of the blue lights in the buildings in the distance on Friday night.

Wuhan, once the hardest-hit by COVID-19, joined in the lighting-up activity on Friday, with several buildings displaying the blue lights and the words "World Children's Day" and "Lighting up the future of children."

Li explained the meaning of the phrases to her daughter and made a wish. "I hope that all children will stay safe, healthy, and happy throughout their lives," she said.

Li said that children are the future of the motherland and humanity and that this year's World Children's Day is special because many children in the world have been affected by COVID-19.

"We need to let the children see that whatever difficulties we face, people around the world will join hands and face up to them with courage," she said. "We will overcome the hardships eventually."

At 6:20 p.m., blue lights started lighting up several buildings in the city of Taiyuan, north China's Shanxi Province. The sudden appearance of the lights made Cui Ziyi, a student of Taiyuan No. 63 Middle School, quite excited. She took pictures in front of the lit-up Shanxi Grand Theater.

"My teacher told me about World Children's Day before," Cui said. "I hope that all children will be able to do what they want to do, realize their dreams, and be happy."

The lighting up activities represent a commitment to children's rights and reimagining a brighter future for every child, especially the most vulnerable, according to the UNICEF.

The UNICEF also launched an online event with Weibo and Sina News to light up cities around China virtually. 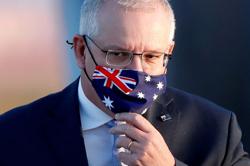