This aerial view screengrab from handout video from Thailand's National Marine Park Operation Center in Trang taken and released on April 22, 2020 shows dugongs swimming in Joohoy cape at Libong island in Trang province in southern Thailand. Drone images released by the National Marine Parks center showed a herd of dugongs sunning themselves beneath clear turqouise waters off the coast of Libong island in southern Thailand. - AFP

BANGKOK: Thai oceans are seeing more fish and rare marine animals since being closed to tourists due to the Covid-19 (coronavirus) pandemic.

Thailand's Department of National Parks, Wildlife and Plant Conservations said in a Facebook post that officials sent out to inspect coral reefs saw a clear increase in the amount of fish among them.

"From the survey, we found that since the national park's closure over the past month, we are clearly seeing an increase in the amount of fish," the posting said.

"For example the parrot fish, which are usually seen in groups of five to six - we are now seeing them in groups of 15 to 20."

It said coral reefs at the Hat Wanakon National Park in Prachuap Khiri Khan province, around 240km south of Bangkok, are not showing new signs of deterioration.

The department said a marine animal conservationist had reported seeing dugongs on a daily basis, sometimes in groups of around five to six, near the island of Ko Libong in southern Thailand.

Dugongs are herbivorous marine mammals that are listed as vulnerable to extinction by the International Union for Conservation of Nature.

The wildlife department had also released drone footage of a herd of around 30 dugongs near Ko Libong it shot on Tuesday.

Thailand has closed all national parks, malls and most shops and meeting places to curb the spread of the coronavirus.

The country has been under a state of emergency since March 26 which will last until at least April 30. - dpa
Article type: metered
User Type: anonymous web
User Status:
Campaign ID: 46
Cxense type: free
User access status: 3 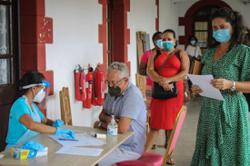