A miracle as turtles return to Thailand's empty beaches, closed due to virus outbreak

BANGKOK: Popular beaches in southern Thailand, empty of tourists due to closures and restrictions related to the Covid-19 (coronavirus) pandemic, are seeing the return of rare wildlife, officials said on Sunday (April 19).

"As we fight the Covid-19 outbreak, nature is also rejuvenating and creating balance,” Warawut Silpa-archa, Minister of Natural Resources and Environment said.

"In crisis, there is always opportunity."

Thailand has imposed a nationwide curfew and beaches and public parks have also been ordered to close as the country struggles to curb the spread of the coronavirus outbreak.

Sopon Thongdee, Director-General of the Department of Marine and Coastal Resources, said on Friday that sea waters have become visibly cleaner and corals are growing back, due to the drastic decline in visitors since Thailand reported its first case of the virus in January.

The empty beaches have also seen a return of endangered marine life.

On Wednesday, Sopon said endangered leatherback sea turtles have built a total of 11 nests, the most seen in over two decades, on beaches in the southern provinces of Phuket and Phang Nga.

He said last November, the turtles began laying eggs, which are being closely monitored by surveillance cameras.

One turtle nest contains around 60-120 eggs which take around 60 days to hatch, he said.

Sopon said officials are watching closely to see if other endangered marine animals return too.

Thai media has reported an abundance of sightings of rare marine creatures including dugongs, which are similar to manatees, as well as pink dolphins and whale sharks. 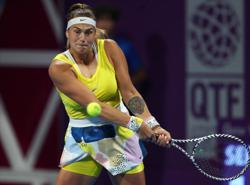 Sabalenka advances in Lexington as WTA Tour returns to US