Conflict of interest over govt project

Jakarta: Several members of President Joko “Jokowi” Widodo’s expert staff have received public criticism over conflicts of interest regarding double roles in public service and private interests, especially during the Covid-19 outbreak. Adamas Belva Devara, co-founder of education technology start-up Ruangguru, is the latest staffer to experience backlash following the naming of his company as one of the government’s eight partners in the pre-employment card programme.

The programme, which was launched on Saturday, offers social aid similar to unemployment benefits with a total worth of 20 trillion rupiah (US$5.5bil).

Responding to the criticism, Belva tweeted on Wednesday that he played no part in any decision-making in the appointment of Skill Academy by Ruangguru as a government partner.

“All decisions were made independently by the Coordinating Economic Ministry and Operational Management, ” said Belva on his Twitter account, on Wednesday.

He also denied accusations of a conflict of interest over the appointment of his company, adding that “all partners went through a public selection process” and that “the participants are the ones who decide which partner they want to get the benefit from”.

Belva said Skill Academy by Ruangguru had gained popularity, with approximately 1 million users, so he thought it would be reasonable for the government to name it as a partner.

Indonesian Corruption Watch activist Egi Primayogha said no public servant should take a role that has the potential to create conflicts of interest.

“So, whatever the reasoning, Belva is still in trouble, ” he said yesterday, adding that the fact that Belva was still made a staffer regardless of his position in Ruangguru showed that Jokowi permitted possible conflicts of interest.

Separately, Rachland Nashidik, a politician from the Democratic Party, condemned the lack of bidding in any partnership between the start-ups and the government over the programme. He said that each partner company in the pre-employment card programme would receive 700 billion rupiah, as reported by tempo.co.

Advocates M. Sholeh and Tomi Singgih were reportedly planning to report the case to the National Police Crimes Unit for power abuse.

Previously, staffer Angkie Yudistia also received criticism about hoaxes she posted on her Instagram account on Mar 15. The post, which has since been deleted, spread false information about the detection of Covid-19. — The Jakarta Post/ANN 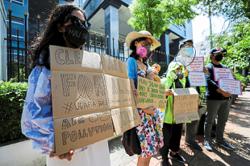