HONG KONG (China Daily/ANN): Amid the so-called tech race between China and the United States, blockchain technology is having its Renaissance in the world’s second-largest economy with the strong backing of President Xi Jinping.

Hong Kong, where the months-long violent protests may have cast a shadow over its long-cherished role in the nation’s financial development, has what it takes to sharpen its edge as China vies for the technological future of finance, experts say.

Just like the bold moves China has made in artificial intelligence, 5G networks, robotics, quantum computing and semiconductors to bolster its tech supremacy, blockchain technology looks to be another field in which the Asian political and economic giant is set to take on a leading role.

The go-to technology, defined as a decentralised ledger of all transactions across a peer-to-peer network, is revolutionary, malleable technology — and China knows it pretty well.

The nation accounts for 25 per cent of new blockchain projects worldwide and holds the most blockchain patents.

According to the Center for Information and Industry Development, China now has more than 33,000 registered companies claiming to use blockchain technology in their operations.

While Mark Zuckerberg was fighting with the US Congress over Facebook’s Libra, Xi said in October that China needs to “seize the opportunities” presented by “an important breakthrough” in what appeared to be one of the first endorsements of blockchain technology from a major world leader.

Echoing China’s ambition to be the “rule-maker” in blockchain technology, Eddie Yue Wai-man, who recently took over as the chief executive of the Hong Kong Monetary Authority, said the special administrative region will step up efforts in blockchain technology, whose sheer power could be given full play in areas like trade finance and cross-border payments, as a big push to put Hong Kong on the fast track in the fintech race.

“Hong Kong’s first-mover advantage around some key blockchain initiatives in industries like financials and manufacturing should position it well.

"The projects so far have been largely in their infancy, and the increased commitment should lead to wider adoption, ” he said.

At the heart of the global blockchain dominance is much about early-mover advantage.

Some Chinese technology giants, like e-commerce behemoths Alibaba and JD, have taken another step forward in developing blockchain platforms.

Both companies have made their platform services available to other businesses for use.

In Hong Kong, local banks lost no time in testing the disruptive potentials of blockchain to reshape the traditional banking industry in 2016.

Leading lenders, including Bank of China (Hong Kong), applied the “game-changing” technology to areas like quick property valuations and trade-finance invoices in their quest to take the city to the forefront of the revolution.

Although Shenzhen, dubbed “China’s Silicon Valley”, often steals the thunder from Hong Kong as far as innovation and technology are concerned, Gantori believes that Hong Kong is “in a unique position” to gain momentum from the national blockchain drive.

As a result, the strong integration initiatives should benefit Hong Kong, given its diversified mix and key role as a regional hub, ” Gantori said.

The UBS executive noted that Hong Kong’s financial services industry is a clear beneficiary “as we see many areas like compliance (strengthening Know Your Customer processes) claim management in the dominant insurance industry, post-trade settlement and FX transfers that benefit from not only cost savings but also new revenue maximisation opportunities”.

Besides the traditional financial services industry — one of the pillars of the Hong Kong economy — blockchain has more to offer and make a difference.

“Healthcare is another industry which should benefit by improving the integrity of data. Public services, the sharing economy and utilities are other industries that show how Hong Kong can benefit from a stronger integration of blockchain services, ” Gantori said.

China’s backing of blockchain has also created plenty of excitement in the cryptocurrency world, including renewed talk of launching the nation’s own digital currency.

With a fresh crackdown on virtual-currency initial coin offerings and cryptocurrency trading, mainland authorities look dead set to put the blockchain fad on the right track.

As the mainland is officially all-in with blockchain, much of Hong Kong’s part should be played under the broader landscape of high-level regional collaboration.

A proof-of-concept trial is due to be conducted in the first quarter of this year to connect the HKMA’s blockchain-based trade finance platform eTradeConnect with the mainland central bank’s Trade Finance Platform. - China Daily/Asia News Network 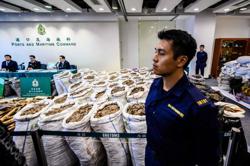