End of the road: File picture of Kerobokan prison in Bali as inmates around the world fear an outbreak in their facilities. — AFP

SLEEPING shoulder-to-shoulder on the floor of a crumbling, windowless room, prison inmates in Indonesia fear an outbreak of the deadly coronavirus inside its walls is a “disaster waiting to happen”.

“It will be a breeding ground for the virus, should it get into any prison, ” said Brett Savage, locked inside Kerobokan prison known as “Hotel K” – on the Indonesian island of Bali, where 1,500 inmates occupy blocks built for 350 people.

Overcrowding, poor ventilation and deficient health, hygiene and sanitation conditions will favour the rapid spread of infectious diseases – making prisons around the world a flashpoint for the new disease.

Prevention measures used in wider society – such as social distancing and frequent hand washing – are often impossible to enforce, leaving authorities with tough choices. And panic is proving especially dangerous inside.

In Thailand unrest led to a group of inmates escaping after rumours a fellow prisoner had tested positive, while 23 died in riots at a Colombian facility amid tensions over the virus.

US jails confined all detainees to their cells, with most visits and transfers cancelled, after dozens were infected with Covid-19, while a string of states have planned to release non-violent prisoners.

Rights groups have warned of a race against time to protect inmates, calling on all countries to relieve the pressure on packed prisons through early release rulings.

Nearly 1,800 people have been infected and 170 have died in Indonesia, but rates of testing are low and experts fear the true figures are far higher in the country of more than 260 million people.

The country has released more than 30,000 inmates, amounting to some 10% of the country’s prison population, and was quick to ban relatives from visiting during the crisis.But even a release on this scale leaves prisons still operating over capacity.

Meanwhile, the Philippines – where prisons cram in up to five times the number of inmates they are built for – has not indicated they will release anyone early, despite calls from international human rights organisations to do so. — AFP 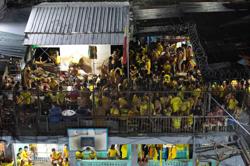