Asian markets mostly down as traders fret over virus

HONG KONG (AFP): Most Asian equities retreated Wednesday after a two-day rally as investors closely track developments in the coronavirus crisis, while the oil market continued to fluctuate ahead of a crucial producers' meeting.

While the deadly disease continues to sweep across the planet, signs that the rate of infections is possibly levelling out and countries are preparing to ease some lockdown restrictions have instilled a semblance of optimism this week.

However, the scale of the fight was laid bare by official data showing France's economy suffered its worst contraction during the first three months of this year since just after World War II.

The French central bank said that in the last two weeks of March, as the coronavirus crisis deepened, economic activity plunged 32 per cent.

"Signs that the number of new daily coronavirus cases is topping out in Western Europe... is driving expectations that social distancing measures will be lifted soon," said Stephen Innes, at AxiCorp.

"Relaxing of social distancing rules is providing the undercurrent of positivity in the markets."

However, uncertainty about how long the crisis will last and the damage it will inflict on the global economy was keeping traders on edge and hobbling any sustainable rally.

Wall Street, where all three main indexes soared at least seven percent at the start of the week, struggled to extend its rally and turned into negative territory Tuesday.

The losses bled into Asia, with Hong Kong losing more than one per cent, Singapore two percent, and Sydney and Seoul each 0.9 per cent.

Tokyo, however, rose more than two percent as Japan's government unveiled details of a US$1 trillion stimulus package, and Taipei piled on 1.4 per cent. Wellington also rose and Mumbai was flat.

Jeffrey Halley, at OANDA, offered a warning for traders to beware any false dawn.

"A lot of good news has been built into asset markets this week on the most tenuous signs that the outbreak is peaking," he said in note.

"Should that be proved premature the correction... could be very ugly indeed."

He said a bear market rally should not be mistaken for the beginning of a V-shaped recovery, adding: "The best we can hope for is a U, with a W in a close second place."

Oil prices rallied, but the commodity continues to swing as traders keenly await Thursday's planned meeting of the world's top producers, which will discuss a possible output cut.

The commodity has been battered by the virus as lockdowns around the world bring the global economy to a standstill and drag on demand, while a price war between Russia and Saudi Arabia has compounded the crisis.

With Riyadh and Moscow taking part, there are hopes they may draw a line under their dispute.

AxiCorp global market strategist Stephen Innes said current figures being discussed point to an output cut of 10 million barrels per day for the OPEC-led alliance -- but cautioned this may not be enough as the virus saps global demand.

"With millions of jobs and the stability of the global economy at risk, someone needs to compromise, or it will leave the industry in tatters," he warned.

Howie Lee, an economist at Oversea-Chinese Banking Corp. said that while a cut of 10 million barrels "would lend some support to prices", he added that US participation was key, otherwise other producers would not be likely to take part.

Energy ministers from the Group of 20 will hold a meeting on the issue on Friday.

Investors were also keeping tabs on talks in Europe where leaders are struggling to agree a path to supporting the region's economy, with the EU's 27 members unable to agree to a solidarity fund using "coronabonds".

The Bank of France, meanwhile, said the nation's economy contracted six per cent in January-March, putting it in recession and marking the worst performance since 1945.

Stocks in Paris fell 1.5 per cent, London shed 1.2 per cent and Frankfurt dipped 0.6 per cent.

In share trading, Australian banks were hammered in Sydney after Bank of Queensland said it would delay its dividend payments, having been urged to do so by regulators.

The move, the first by a lender in the country, fuelled fears that others would follow. - AFP 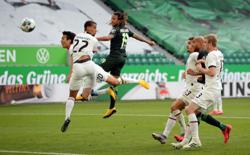