Lockdown in Philippines extended to April 30

A worker constructing a cubicle in a quarantine facility under construction at the World Trade Centre in Manila (April 7). Philippines President Rodrigo Duterte announced that Phillipines will extend a lockdown of more than half the country’s population on its main island until April 30 to further stem the coronavirus outbreak. - Bloomberg

MANILA: The Philippine president on Tuesday (April 7) has extended by half a month to April 30 a lockdown that requires millions of people in the country’s main northern region to stay home amid the Covid-19 (coronavirus) outbreak.

President Rodrigo Duterte said in a late-night TV speech that the government was desperately looking for more funds for a massive cash and food aid intended to prevent the poor from starving to death. There have been appeals for middle-class families to be given emergency aid too, he said.

"If there’s nothing to eat, a human being can be violent especially if he sees his children without food and he’s driven to tears,” Duterte said, adding he has ordered the finance secretary to "steal, borrow, I don’t care,” just to produce more emergency funds.

The government has targeted 18 million low-income families for economic rescue under the lockdown with a 275-billion-peso (US$5bil) budget in the next two months.

Duterte demanded that the aid be given more rapidly amid complaints of delays and confusion over who should get it.

The Philippines has reported 3,660 cases of COVID-19 disease, including 163 deaths.

Meanwhile, United Nations Secretary-General Antonio Guterres will brief the UN Security Council for the first time on the coronavirus pandemic on Thursday (April 9), behind closed doors.

The UN’s most powerful body has come under criticism for not addressing the global crisis caused by the COVID-19 disease. The council has in the past spoken out on two public health emergencies - HIV/AIDS and Ebola.

The U.N. General Assembly unanimously approved a resolution on April 2 recognising "the unprecedented effects” of the coronavirus pandemic and calling for "intensified international cooperation to contain, mitigate and defeat” the Covid-19 disease.

Resolutions of the 193-member world body reflect global opinion but are not legally binding.

Diplomats say the Security Council, whose resolutions are legally binding, is divided between its 10 members who are elected for two-year terms and some of its five permanent members - the United States, United Kingdom, France, Russia and China. - AP
Article type: free
User access status: 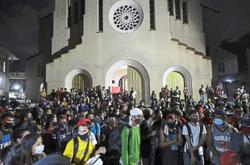