President Joko Widodo said the government is considering starting a new national holiday to prevent the annual mass exodus usually occurring at the end of the Muslim fasting month amid concerns over the spread of the coronavirus which has infected more than 1,700 people.

Joko said at a Cabinet meeting yesterday that measures could be in place during the new holiday such as making tourist attractions free to help “bring calm to the people”.

Indonesians, nearly 90% of whom are Muslim, celebrate the end of Ramadan or the Aidil Fitri festival with a feast and new clothes, usually returning to their home villages or towns. Ramadan this year falls over April and May.

Indonesia’s social affairs minister also said the country plans to give special assistance to residents of Jakarta within two weeks to limit the exodus from the capital during the Ramadan holiday period.

“What we’re doing is providing an additional programme to limit the dispersal of “mudik” travellers from Jakarta to regions, ” Minister Juliari Batubara said yesterday after the Cabinet meeting, referring to the tradition of people returning to their home towns and villages after Ramadan.

Officials have said travellers will not be banned but will need to have medical checks if they return to their home villages.

He reported 13 new deaths from the virus, taking the total to 170, while a total of 112 so far had recovered. — Reuters 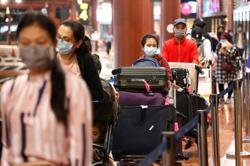