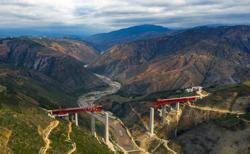 As the first overseas route connecting China's railway system using Chinese technology and equipment, the China-Laos Railway is a major project in implementing the Belt and Road Initiative. - AFP

VIENTIANE (Xinhua): The Ban Ladhan Mekong River Super Major Bridge on Wednesday (April 1) achieved its main section closure over the Mekong River, and thus, major engineering works on both cross-Mekong bridges along the railway have been completed.

According to the Laos-China Railway (LCRC), a joint venture in charge of the construction and the operation of the railway, the Ban Ladhan Bridge is located some 230km north of the capital Vientiane. With 1,652m in length, it has a total of 45 spans connecting two platforms and 44 piers.

All the main piers, with the highest up to 52m, are located in the middle of the Mekong River along the China-Laos Railway.

To ensure the smooth construction of the Ban Ladhan Bridge, the Chinese engineering company, the China Railway No. 8 Engineering Group (CREC-8), has been actively working with the communities and local governments since mid-February due to the Covid-19 pandemic.

The Chinese company and government have assured all the returnees had been isolated at home for 14 days before leaving for Kunming, capital of China's Yunnan Province, and then to Laos. After arriving in Laos, the returnees were again quarantined for another 14 days before resuming their posts.

The other cross-Mekong River China-Laos railway bridge completed its main section closure on July 28,2019, seven months ahead of the targeted timetable.

As the first overseas route connecting China's railway system using Chinese technology and equipment, the China-Laos Railway is a major project in implementing the Belt and Road Initiative.

The ground-breaking ceremony of the railway was held in December 2015. The 414-km China-Laos railway, expected to be operational in December 2021, links the Mohan-Boten border gate in northern Laos and Vientiane. - Xinhua