WUHAN: A 29-year-old doctor in Wuhan, Hubei province, has died from the Covid-19 pneumonia, according to the local health administration.If the outbreak had not occurred, Peng Yinhua, the doctor, would have held his wedding ceremony on Feb 1 with his wife.

But in January, Peng returned to work at the First People’s Hospital of Wuhan Jiangxia district, putting his wedding day on hold, The Paper reported.

He was diagnosed with Covid-19 on Jan 25. His condition worsened on Jan 30 and he died on Thursday night despite treatment.

A nurse who had been taking care of him said on her Sina Weibo that Peng had always been positive and smiling even when lying helpless in his hospital bed. — China Daily/ANN 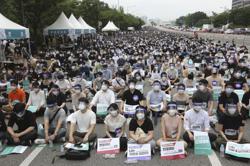