Covid-19 or not, China-Laos railway project moves on as planned

The China-Laos Railway is an important docking project between the China-proposed Belt and Road Initiative and Laos' development strategy to convert it from a landlocked country to a land-linked hub. Started in December 2016, the project is scheduled to be completed and opened to traffic in December 2021. - China Daily/ANN

The company, based in the Laos capital Vientiane and in charge of the construction and future operation of the railway, said the project is at a critical stage of completing sub-rail civil engineering and starting track engineering in 2020.

At present, the company has arranged recent construction and epidemic prevention and control tasks for each participating unit to minimize the impact of the novel coronavirus epidemic (COVID-19), the company told Xinhua.

In the central section of the China-Laos railway, the China Railway No. 8 Engineering Group (CREC-8) is building two bridges across the Mekong River to the north of the ancient Lao capital Luang Prabang, some 220 km north of Vientiane.

"The project management has decided not to take holidays before the Spring Festival, so most of the managers and operators are at the construction site. Hence, our construction is basically not affected by the epidemic situation, and all production schedules are progressing as planned," CREC-8 on-site manager Yan Haiyong told Xinhua.

In the northern section of the railway, the CREC-5 had pushed the first section's construction on a fast track and was expected to finish its job ahead of the set timetable, so relatively more of its staff returned home for the Spring Festival.

Due to the COVID-19 situation in China, some CREC-5 engineers cannot return to their position in Laos and part of the construction materials' transportation has been halted in China.

"Thus the resumption of our construction work is affected to some extent, but in general the section will be completed on time," section manager Zhou Xiaoxia told Xinhua on Saturday.

In the mountains north of Vangvieng, a popular tourist destination in central Laos, around 160km north of Vientiane, the Power China Sinohydro Bureau 14 Co., Ltd (Sinohydro 14) has carried out epidemic prevention measures for staff returning after the Spring Festival holidays.

The Sinohydro 14 management has arranged a special bus for picking up new arrivals, quarantined the returnees and is monitoring their body temperature. It also promotes knowledge of epidemic prevention and control, sterilizes living and office areas and has prepared medical supplies.

In the sixth section and the southernmost of the China-Laos Railway, the CREC-2 project headquarters and construction sites are close to the populated Lao capital of Vientiane, which makes epidemic prevention and control more complicated.

Huang Ningshu, a CREC-2 project manager, said that during the Spring Festival, construction on the China-Laos Railway in his section continued without holidays, to ensure progress on the section's key works.

The CREC-2 is trying every means to improve epidemic prevention and control work and is stepping up the transfer of its sub-rail works, so as to build a solid foundation for the track-laying works to be carried out on schedule, Huang said.

The China-Laos Railway is an important docking project between the China-proposed Belt and Road Initiative and Laos' development strategy to convert it from a landlocked country to a land-linked hub. 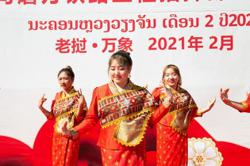