Coronavirus: pathogens linger in toilet for hours if you flush without closing lid – and some may still sneak through even if it is down, Hong Kong study finds

A toilet flush can release up to 80,000 polluted droplets and leave them suspended a metre in the air for hours if the lid is left up, a new study has found.

The findings, released by City University’s Department of Architecture and Civil Engineering on Thursday, also revealed smaller bacteria are even more likely to become airborne and transmitted into the surrounding area via droplets produced in flushing. Smaller agents still, such as the deadly coronavirus now confronting Hong Kong, may also spread through the water particles.

Alvin Lai Chi-keung, associate head of the department who led the year-long study, said while water droplets created in flushing might rise up to a metre if the toilet was not covered, international studies suggested polluted particles may still sneak through the gaps between the toilet and its lid, even if it was lowered before flushing. 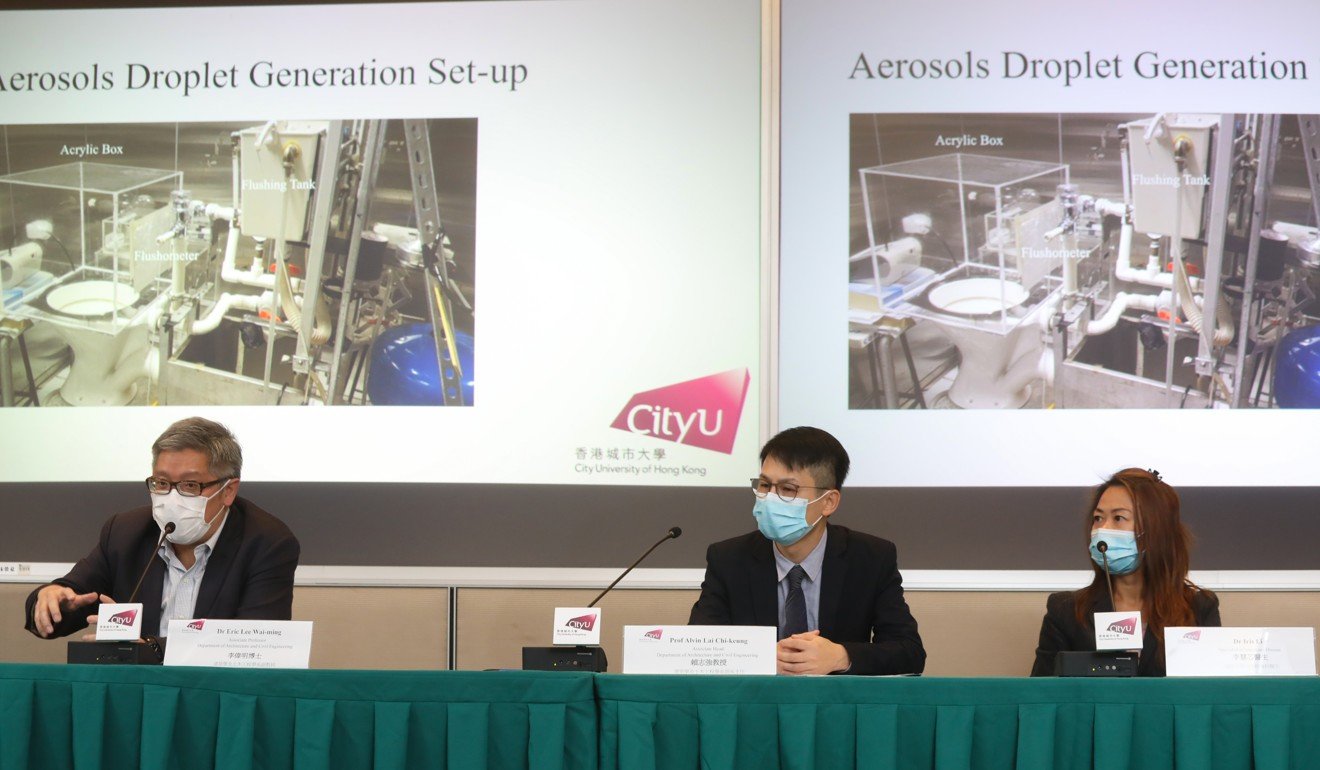 “Covering the toilet lid while flushing is definitely essential, but it should not be considered a complete prevention,” he said.

Lai said he was not intending to add to public fear amid the outbreak of Covid-19, the disease caused by the new coronavirus, as his study was begun years ago.

He advised households to clean the washroom using diluted bleach thoroughly on a regular basis, maintain good ventilation and always close the door if it is not in use.

The study, which aimed to uncover the relationship between airborne aerosol droplets and the transmission of pathogens, found that a mechanical flush from a cistern – the most common among Hong Kong households – could produce up to 14,500 droplets ranging from 0.3 to 10 micrometres in size.

A flushing system using a valve or flushometer can release up to 80,000 particles in the air.

Lai said droplets polluted with bacteria could follow the air flow and contaminate other parts of the household if the washroom was not sanitised and ventilated regularly.

He said that even though closing the toilet lid could prevent flush water from spilling out, polluted particles might still be attached to the lid and released in the air on subsequent flushing.

Covering the toilet lid while flushing is definitely essential, but it should not be considered a complete prevention
Professor Alvin Lai of City University

He recommended households ventilate the washroom often to prevent saturation of airborne bacteria. He said 87 per cent of airborne pathogens could be removed from the toilet space by turning on the exhaust fan for 15 minutes, and only two per cent of pathogens would be left in the air if the fan was kept on for a further 15 minutes.

He added that people should brush the toilet during cleaning to effectively remove all bacteria that had adhered to washroom surfaces.

Professor Iris Li Wai-sum, a member of the research team, said windows in the washroom should remain closed during ventilation to avoid drawing the polluted air back inside.

Eric Lee Wai-ming, an associate professor at the department, suggested applying a half flush if possible to reduce the amount of droplets produced in flushing.

Earlier this month, Shanghai’s health commission classified aerosol transmission, which occurs when tiny particles or droplets of the virus suspended in the air are inhaled, as a way of contracting Covid-19.

The National Health Commission and the World Health Organisation, however, have not yet added this to its list of transmission methods.

The WHO said Covid-19 was mainly transmitted through close personal contacts, but the full extent of transmission methods required further study.