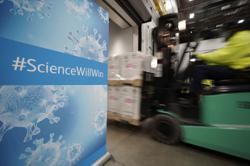 BEIJING (China Daily/ANN): A scientist from the Wuhan Institute of Virology of the Chinese Academy of Sciences has debunked a recent conspiracy theory that claimed the novel coronavirus was manufactured and escaped from the institute's most advanced biocontainment facility.

Shi Zhengli, a researcher from the institute, said on social media on Sunday (Feb 2) that the virus was the result of "nature punishing the uncivilised habits and customs of humans", and she is willing to "bet my life that it has nothing to do with the lab".

Shi was the lead scientist in the discovery that the novel coronavirus can enter cells through the ACE2 receptors and may have originated in bats.

Her comments came after Indian scientists recently published a non-peer-reviewed paper suggesting that scientists had artificially inserted genes from the HIV virus into the coronavirus, thus making it susceptible to anti-HIV treatments.

The paper was immediately panned by experts around the world and was removed on Sunday from the server of bioRxiv, a biology journal repository.

In a twitter post commenting on the paper, David Liu, a chemistry professor at Harvard University, said: "The mere claim that such short inserts support nCoV origins 'unlikely to be fortuitous in nature' is already highly suspect."

The term nCoV refers to the novel coronavirus.

"This is a classic case of searching for lost keys only under a lamppost," Liu said.

"A fearful world does not need to fuel conspiracy theories with bad analyses."

The Indian article was widely cited by conspiracy media outlets as proof that Chinese scientists had engineered the virus and that it had escaped from the institute's biosafety level-IV laboratory, the highest biohazard precaution standards designed to contain and study the world's most dangerous pathogens, including Ebola, smallpox, Lassa fever and Marburg virus.

The conspiracy theory began in late January when British tabloid the Daily Mail and the Washington Times, a conservative US newspaper, published articles claiming the recent outbreak could be the accidental result of secret biological weapons research in China.

Though the articles provided no evidence, the fringe theory quickly went viral on social media, prompting media outlets from the BBC to Foreign Policy to speak up against it.

On Jan 28, the Chinese embassy in Italy said in a statement that the theory is baseless, false reporting.

"China will continue to maintain an open, transparent and highly responsible attitude when publishing information regarding the outbreak," it said.

"While strengthening outbreak prevention and control, China will continue to deepen international cooperation and tackle the disease together with the international community and jointly maintain the safety and health of the region and the world." - China Daily/Asia News Network