Five aspiring Chinese musicians whose lives have been changed by transplants have honoured the Australian teacher whose organs gave them a second chance by fulfilling his dream of starting a band.

Phillip Hancock was 27 when he died in May 2018 from complications of type 1 diabetes. His liver, kidneys and corneas saved the lives of three people and restored eyesight to two others.

Before he died, Hancock’s parents, Peter and Penny Hancock, flew from Sydney to Chongqing in southwestern China to sign the organ donor’s pledge on his behalf, which, according to the Chinese Red Cross, made him the first foreign donor in his adopted hometown and the seventh in China.

At the end of last year, after hearing from his father that Hancock “loved music, loved playing the guitar, loved rap and performance and his dream was to build a band”, the five, who had no musical training, decided the donor’s dream would come true. 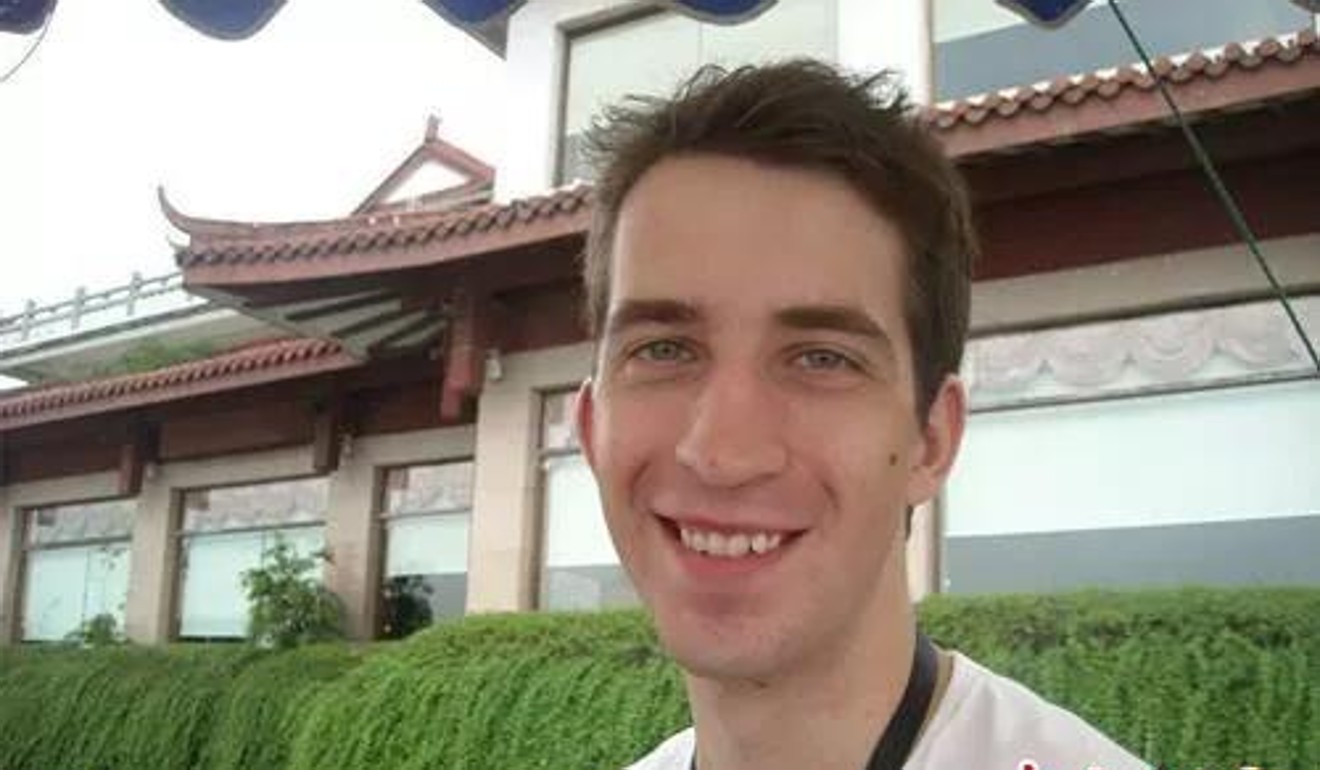 “We had no music sense in the past [but] now we have, ” Mo Li, a 36-year-old woman who has one of Hancock’s kidneys, told Heilongjiang TV Station in a documentary about the group last month.

Mo and Tan Daobi, a 53-year-old cornea recipient, play maracas in A Band for One. Chen Junxian, 33, another cornea patient, is the group’s bass player, while 50-year-old kidney recipient Chen Jingzhong plays handbells, and Wu Jun, 40 – who had a liver transplant – plays guitar.

All of them were grateful to Hancock, who graduated from university in Australia with a distinction and began teaching English at Southwest University in 2013.

Chen, a former truck driver who lost the sight in his right eye after being splashed in the face with pepper water, said in the programme: “Brother, thank you for letting me see light again. I’ve told my family that when I die, if my things [organs] are useful, I am willing to donate.”

Tan, who suffered from keratitis, inflammation of the cornea, was unable to see for more than 20 years. Thanks to the transplant surgery, she said was raising chickens and planting vegetables, which are things she dared not imagine before. 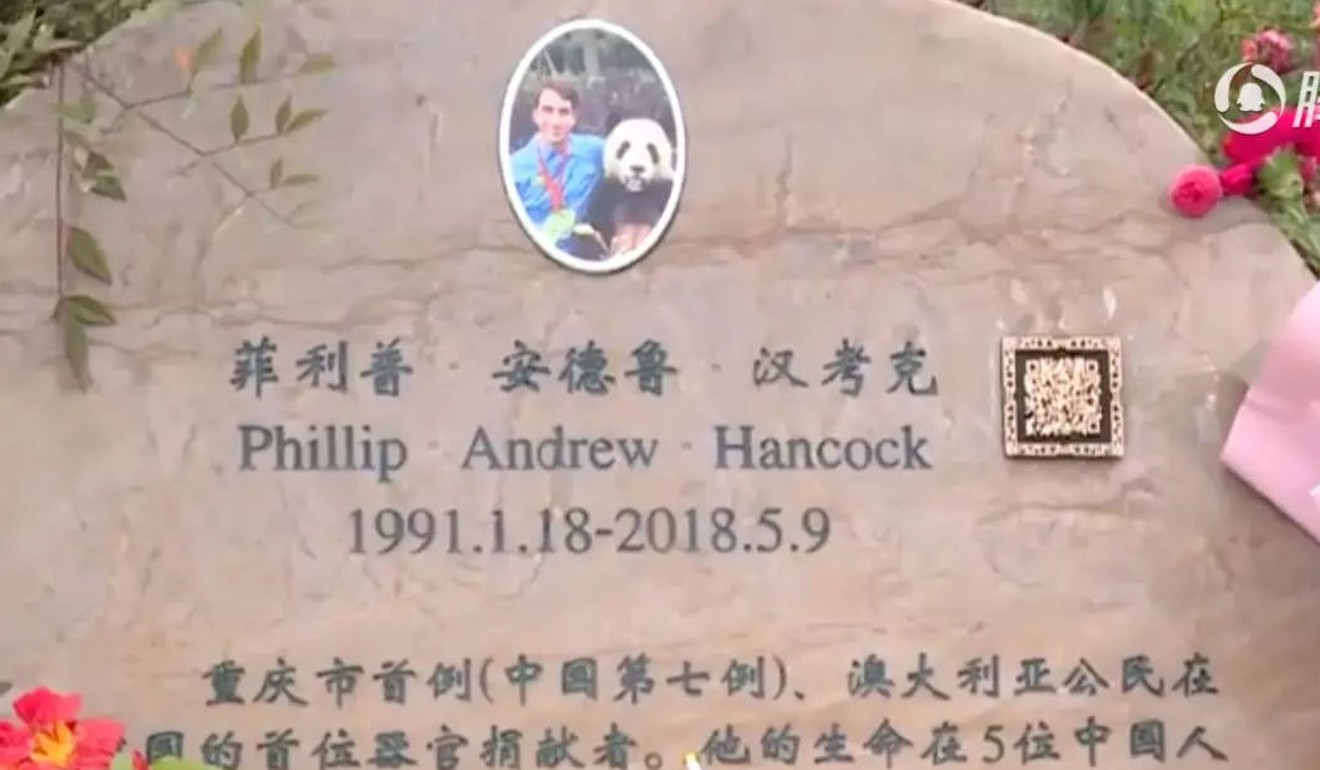 Hancock fell in love with Chinese culture in his teens and won a language competition, his father said at a memorial in Chongqing on March 31 staged by Beijing-based Chinese Organ Donation Management Centre, where the parents were guests.

After winning the contest, Hancock travelled to China “because he speaks Chinese so well”, the 63-year old said. “It was at this time that Phillip made a decision to live and work in China, teaching English.”

While Hancock was critically ill, he told his parents that he would like to donate any of his organs to help other people.

“Sadly he passed away in May 2018, ” his father said. “He was only 27 years old and in his prime. On hearing this news, his family was inconsolable, his friends were devastated and some people even refused to believe he died.”

After a funeral service in China, Hancock’s ashes were taken back to Australia and interred besides his grandparents.

Hancock said he and his wife took comfort that the five recipients were alive and healthy. At the end of last year, he wrote a letter to his son after learning the five had started a band. The management centre posted the letter on its WeChat account.

“Phillip, I know how much you loved and enjoyed playing your guitars, ” it said. “The 5 organ recipients are members of our family now, and I know that they love you and want to celebrate your life almost as much as we do. They have formed a wonderful musical group in your honour and as a tribute to you, your generosity and your love of music and playing the guitar.” A Band for One are expected to perform two songs, Rebirth and Experiencing Life, at this year’s transplant memorial event, which is scheduled to take place in Nanjing, eastern Jiangsu province, in March, China News Service reported.

Chen said playing bass had become his hobby, Wu said practising guitar had made his life more busy and significant, while Tan said she was afraid she might get left behind by the band and practises once she is free of her farm chores, the report said.

In 2018, China was second only to the United States in terms of organ donors and transplants. By the middle of last month, more than 1.7 million people in mainland China were registered organ donors.

The donation centre said its records showed that 77,447 organs had been taken from 27,059 volunteers after their deaths.

In 2015, China announced that donors would be its only source of transplant organs after international pressure forced an end to the practice of harvesting executed prisoners’ organs.