Sentosa Merlion to be demolished to make way for new development Work to demolish the 37m-tall Merlion statue, which sits at the heart of Sentosa, will begin by year-end when construction on the S$90mil Sentosa Sensoryscape project (left) will commence. – JASON QUAH/Sentosa Development Corporation

SINGAPORE (ANN): One of Sentosa's most iconic structures will be making way for a themed thoroughfare that will link its north and south shores. This is part of long-term plans to reshape the resort island and the adjacent Pulau Brani into a premier leisure and tourism destination.

Work to demolish the towering 37m Merlion statue, which sits at the heart of Sentosa, will begin by year-end, when construction on the S$90mil (RM273.4mil) Sentosa Sensoryscape project will commence.

About the size of five-and-a-half football fields, or 30,000 sq m, the new two-tiered thoroughfare will connect the mainland-facing Resorts World Sentosa (RWS) with the beaches in the south, and replace the existing walkway.

Its completion by 2022 will mark the first milestone of the blueprint for the two islands, to be rolled out in phases over the next two to three decades.

Details of the Sentosa-Brani Master Plan, announced by Prime Minister Lee Hsien Loong in his National Day Rally speech last month, were revealed at a media briefing on Sentosa on Friday.

The two islands will be divided into five zones that will take on a more leisurely character the farther they are from the city, SDC said.

The Vibrant Cluster zone, which spans the two islands, will have large-scale attractions. Island Heart will feature hotels, conference spaces, dining and retail outlets, while the Waterfront zone on Pulau Brani will house a Discovery Park.

The Ridgeline zone will connect green spaces from Mount Faber to Mount Imbiah and feature nature and heritage attractions, while Sentosa's beaches will be rejuvenated with a water show, fairgrounds and other attractions in the Beachfront zone.

Transport connectivity will also be enhanced, and a "Downtown South" resort modelled after the labour movement-run Downtown East in Pasir Ris, announced by PM Lee, will likely be built on Pulau Brani.

The 1.22 sq km Pulau Brani, about a quarter the size of Sentosa, now houses a port terminal, which will move to Tuas by 2027 along with the terminals in Keppel and Tanjong Pagar.

The two islands are part of the upcoming Greater Southern Waterfront district, a 30km-long coastal stretch to be developed for living, working and playing.

SDC chief executive Quek Swee Kuan said that rather than having distinct identities, the islands will be linked and integrated in their development, leveraging their island charm and proximity to the city.

The last day of operations for the Sentosa Merlion will be on Oct 20, and the four eateries and shops will close progressively from Oct 21. When the Merlion was constructed in 1995, visitorship to the island was between four and six million, compared to more than 19 million last year, said Quek.

There is, thus, a need for a wider thoroughfare, and the Sensoryscape will double the current pedestrian capacity, he said.

"We won't relocate the Merlion because of its size, but we are considering how to commemorate it," said Quek, who added that a new icon for Sentosa is also being considered.

While visitorship to the island may be affected by construction works, this will be mitigated by the upcoming Siloso Green lifestyle quarter to open by year-end, as well a new family-themed attraction at Palawan beach, he said.

Bars, food trucks, live music and waterfront accommodation will feature in the shipping container-themed complex, announced earlier this year. It will span 24,500 sq m of grounds formerly occupied by Underwater World, and aim to boost the island's night offerings.

SDC is in touch with NTUC Club to identify a suitable location for the Downtown South resort, said Quek.

He confirmed that the Police Coast Guard headquarters on Pulau Brani will remain, but said other plans for the island are still being developed.

Senior Minister of State for Trade and Industry Chee Hong Tat, who first revealed plans to reshape the two islands in line with plans for the mainland last year, said that the blueprint aims to position Singapore as a leading tourist destination over the coming decades.

The Sentosa Sensoryscape will complement RWS' expansion and subsequent infrastructure enhancements on the two islands, he added.

Chee told the media that the decision was made to link and develop the two islands together to maximise land use and create scope for more projects and better connectivity.

"There are also plans to see how we can, in the short and medium term, enhance the value of...the Southern Islands for eco-tourism, for families to visit and learn about a part of Singapore," he said.

Asked whether there is potential to redevelop other neighbouring islands, he said that organising events and other activities are on the cards for now, while the option is being kept open for the longer term.

The Singapore Tourism Board said in a statement that the redevelopment of the two islands forms an integral part of Singapore's efforts to rejuvenate its leisure offerings and maintain its appeal.

While the construction of the Sentosa Sensoryscape entails the closure of the popular Merlion attraction, "we are confident that both locals and visitors will have more to look forward to on Sentosa in the coming years when the five distinct zones are completed", it said. 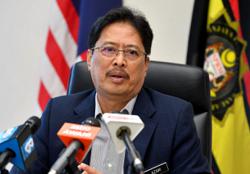 S’pore Polytechnic student allegedly trespassed into female toilet on campus and committed voyeurism
WhatsApp is now adding invite links for joining in-app calls
U.S. VP Harris eyes ways to ease S.Korea concern on EV subsidy rules-Yonhap
Cost of crypto: Report says US bitcoin as dirty as six million cars
MACC seeking best way for public to follow probes' progress
Bitcoin bounces above $20,000 for first time in about a week
Ringgit opens lower against US dollar
Grab expects to break even in its digibank operations by 2026
If you are a ‘cloud’ specialist, Switzerland may be the place for you
99 Web domains illegally streaming sports, Korean drama blocked in S’pore