The obsession with bubble tea sweeping across Singapore

Big favourite: Bubble tea drinks have had a big following in Singapore since 2001.

SINGAPORE: There is a bubble tea craze sweeping across Singapore again, and it is catching on elsewhere too, even as related products are popping up.

YouTubers around the world also hopped onto the bubble tea craze, making videos about consuming and interacting with the drink in extreme ways.

One YouTuber made giant tapioca pearls (a common bubble tea topping), while another made milk tea in a bathtub and soaked herself in it.The global bubble tea market was valued at US$1.96bil (RM8bil) in 2016 and is projected to reach US$3.21bil (RM13.22bil) by 2023, according to research firm Allied Market Research.

In 2016, North America and the Asia-Pacific accounted for more than 83% of the global bubble tea industry, in terms of value.

Despite the growing thirst for bubble tea around the world, the drink came to Singapore’s shores much earlier in 2001.

Competition among bubble tea shops was so fierce that one store even used scantily clad models to entice customers.

“Models can move around and they are attractive.

“People can look at them, get closer, and hear what you want to say about your product,” said Jeffrey Chung, the director of Jeffrey Chung Models.

Bubble tea shops proliferated, with a whopping 5,000 shops in 2002. But the bubble burst in 2003 and many stores eventually closed down.

Even so, the craze saw a resurgence in 2011 as new Taiwanese bubble tea chains entered the local market.

Since then, Singapore has seen two more waves in the drink’s popularity – in 2018 and 2019. — The Straits Times/Asia News Network 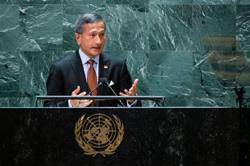