Trade war: will China use ‘nuclear option’ of banning rare earth exports to US?

As China looks for ways to retaliate against the United States in a rapidly escalating trade war, one potential target that is looming large, particularly for the technology sector, is rare earth metals.

The minerals are vital to the production of components that power electric vehicles, anchor the audio and camera systems of Apple iPhones and help the US military’s guided missiles reach their targets.

The elements – little known beyond chemists, geologists and speciality manufacturers until their political importance became more apparent in recent years – are also predominantly mined and refined in China.

As trade tensions have escalated, analysts are questioning whether Beijing will use the “nuclear option”, its dominance in the industry, as a check on efforts by US President Donald Trump to place tariffs on nearly all goods exported from China, as he seeks to change years of Chinese industrial and trade policy.

Speculation has been rampant this week after Chinese President Xi Jinping and his top trade negotiator were photographed at a rare earth mining and processing plant in China’s eastern Jiangxi province, a key region for mining rare earths used in electric vehicles.

Stocks of Chinese rare earth companies have soared since the visit, as investors anticipate a tightening in the supply of some rare earths and potentially higher prices.

The prices of so-called heavy rare earths, which are used in batteries for electric vehicles and in defence applications, have risen 30 per cent this year, said Helen Lau, senior analyst and head of metals and mining research at Argonaut in Hong Kong.

“I think it is a little bit reckless, from my point of view, for China to ban the export of rare earths to the US directly,” Lau said. “There’s always some way to have a similar impact … Maybe we want to reduce exports to everyone. That is a likely scenario.”

Lau said she believes China, regardless of the trade war, will ultimately move to reduce exports of rare earths to meet its own domestic demand.

A key time to watch will be June, when China is expected to set its mining quota for rare earths for the second half of the year. The first half quota was 60,000 tonnes, the same as last year, she said.

Rare earths are one of the few categories of products that have avoided US tariffs despite threats last year by the Trump administration.

China has put its own retaliatory tariffs on US-produced rare earth elements and several categories of these minerals are set to face additional tariffs of up to 25 per cent come June 1.

The 17 elements, with sometimes hard to pronounce names such as lanthanum, neodymium and ytterbium, share similar chemical and physical properties. They are more plentiful than precious metals such as gold and platinum, but can be difficult and expensive to refine and extract.

They are used to provide precision polishes to flat-panel displays, remove impurities in steelmaking and to make phosophers used in incandescent and LED lights. Some are even used as pigments in ceramics. 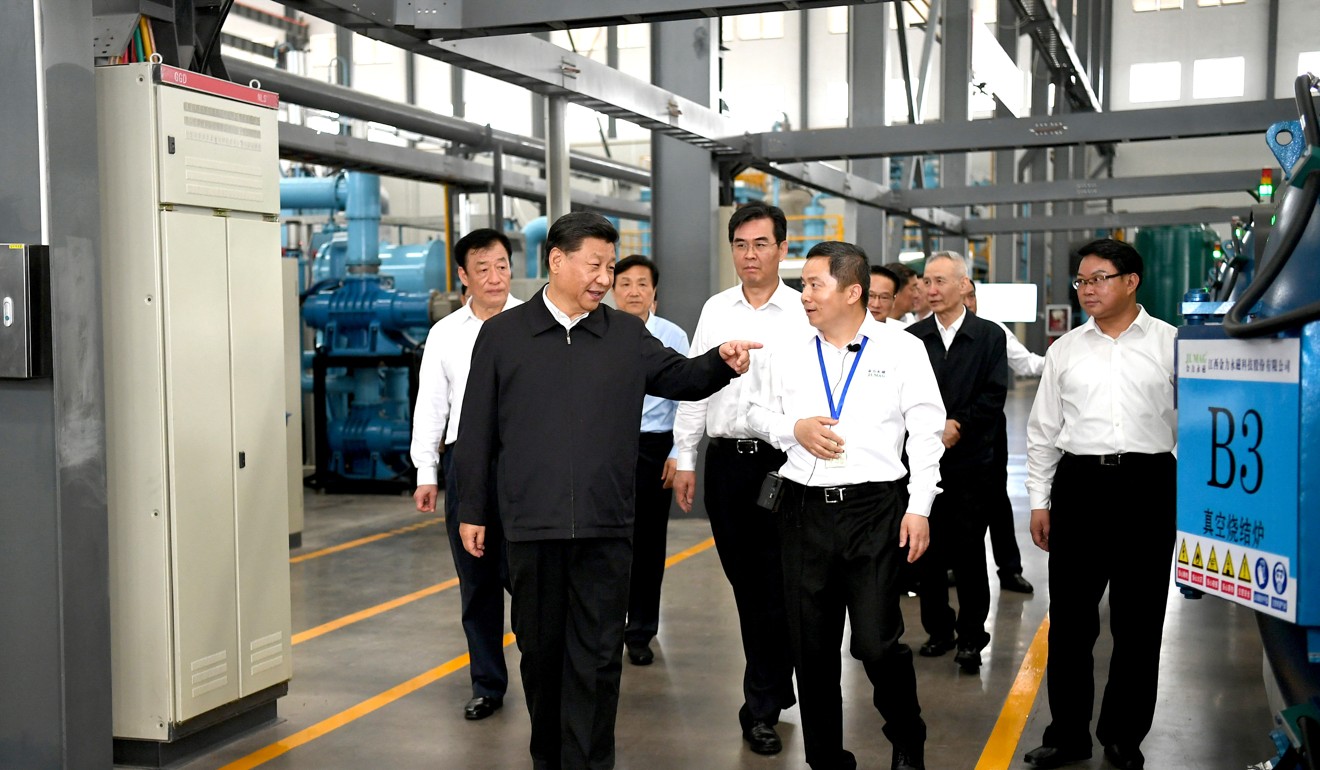 The US used to dominate the industry, serving as the world’s leading miner until the 1980s, when it was overtaken by China, according to data from the US Geological Survey. Lower labour costs and more lenient environmental standards are some of the reasons why mining migrated from the US.

Last year, China accounted for seven out of every 10 tonnes of rare earth elements mined worldwide and was the biggest exporter to the US, according to data from the Geological Survey and the US International Trade Commission.

In addition, China has moved to create an ecosystem that not only extracts the raw materials, but produces components that rely on rare earths, such as magnets vital to missile guidance systems and synthetic gems used in high-power lasers.

China’s unwavering dominance in the market has raised concerns among companies and policymakers, particularly as China has used it as a weapon in the past.

During a diplomatic stand-off in 2010, China briefly limited exports of rare earth materials to Japan in a row after a Chinese trawler collided with Japanese patrol boats near a disputed island. China did so without publicly acknowledging the restriction.

That same year, Beijing placed quotas, licences and taxes on rare earth elements as the worldwide use of rare earths in clean energy and defence technologies was on the rise. China removed these restrictions in 2014 after the US, Japan and members of the European Union complained to the World Trade Organisation.

Frankie Chan, senior research analyst at Emperor Securities in Hong Kong, said that Xi’s visit to Jiangxi was likely an attempt to send a “strong message” to the US.

“We have seen China use these as an effective means to retaliate,” Chan said. “Maybe after June, there will be some follow-up action. Now it’s just a message – I have the upper hand on the rare earth front. If we still keep on without any improvement, I will retaliate.”

Presidents Trump and Xi are expected to meet on the sidelines of the G20 summit in Osaka in late June. Chan said he expects Beijing will begin with a small quota or restriction, and increase it on a step-by-step basis if things do not improve.

The US Government Accountability Office, an independent, non-partisan agency, warned three years ago that China’s dominance “may pose risks to the continued availability” of rare earth materials for defence applications in the future. The Mountain Pass Mine in San Bernardino County, California, is the only producer of rare earth elements in the US and its raw materials are refined in China. The mine was acquired out of bankruptcy in 2017 by an American consortium backed by China’s Shenghe Resources Holding.

On Monday, Lynas Corporation, an Australian mining company, and American chemicals company Blue Line Corporation announced they had signed a memorandum of understanding to develop a plant to produce separated medium and heavy rare earth products in Hondo, Texas, “to close a critical supply chain gap for United States manufacturers”.

Concerns about availability and rising prices have spurred technology manufacturers to find ways to recycle and reuse rare earth materials from their devices, and has led to increased exploration by governments worldwide.

Japanese scientists recently announced they had discovered a concentrated deposit of rare earths on the sea floor about 2,000 kilometres southeast of Tokyo.

Even as tensions are rising between the world’s two largest economies, Ryan Castilloux, managing director at Adamas Intelligence in Amsterdam, said he doubts China would put a ban on rare earth exports to the US.

“It would be a last leverage in a very extreme situation,” Castilloux said. “Once China uses its rare earth dominance as a political tool, it would push end users to look for alternatives.”