In this Jan. 23, 2019, photo, Park Jiehyun, feature?s director at Cosmopolitan Korea, watches fashion magazine during an interview in Seoul, South Korea. South Korea has the world

SEOUL (AP): As she pursued her dream of becoming a fashion model, veering for years between extreme dieting and overeating, Park I Seul realised she had a problem: She was not tall and skinny, like typical runway models, nor was she big enough to be a plus-size model.

She also realised that the only way to meet South Korea’s lofty beauty standards was for her to continuously deny who she truly is.

So Park, 25, began calling herself a “natural size model” – a nearly unheard of term in South Korea – which she defines as someone with the same kind of body you see in daily life, as opposed to a difficult-to-attain ideal. In this Jan. 16, 2019, photo, Park I Seul speaks during an interview in Seoul, South Korea. As she pursued her dream of becoming a fashion model, Park realized she was neither tall or skinny, like typical runway models, nor “big enough” to be a plus-size model.

She began to get work, and she started a popular YouTube channel where she introduces fashions for women who look more like her than like the women in fashion magazines.

Her newfound positive view of her body makes her part of a growing movement by South Korean women to resist what they see as extreme pressure to look a certain way.

Hundreds of young women have taken to social media with the hashtag #talcorset, or take off the corset, to encourage others to free themselves from social stereotypes about their appearance that they feel have long bound them.

Park recently held what she called a “nondiscriminatory” fashion show in Seoul, where models varied in height and weight confidently strode across the stage.

Other women have posted online photos or video clips showing themselves cutting their hair short, destroying their beauty products and going to school or work without makeup. 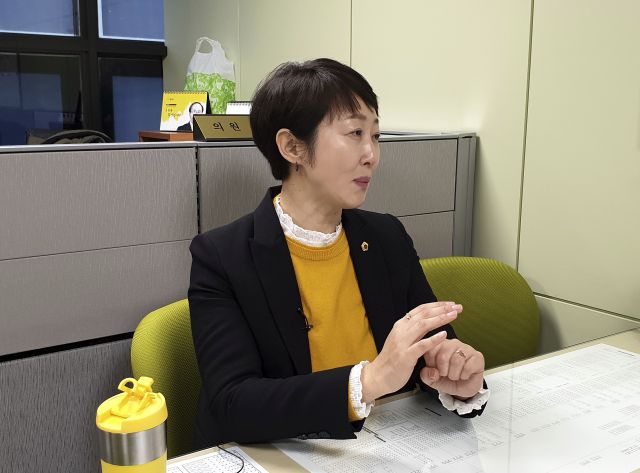 In this Jan. 14, 2019, photo, Kwon Su Jeong, a Seoul councilwoman who has worked for Asiana, a major South Korean airline, speaks during an interview in Seoul, South Korea. Airline companies often demand a stricter dress code for female flight attendants, according to Kwon, a Seoul councilwoman. Kwon is currently on a leave of absence to work in the city council.

In South Korea, a woman weighing over 50kg is considered by many to be chubby, regardless of how tall she is.

Park herself is 165cm tall and weighs 62kg, which she says puts her far from the minimum 170cm and 40-48kg weight that conventional fashion models have; she’s also nowhere near the XL and above sizes demanded for plus-size models.

“I used to think that my fat body wasn’t the real me and that living in such a body wasn’t my real life. I kept denying myself. I believed that my life would only become happy after I lost weight,” Park said. “I’ve come to think that I look good enough just the way I am.”

South Korea is a deeply conservative country, and experts say its patriarchal society encourages rampant sexism. It had the largest gender pay gap among developed countries in 2017, according to the Organisation for Economic Cooperation and Development, and ranks 115th out of 149 nations in the World Economic Forum’s global index of overall gender parity in 2018, among the lowest-ranking G-20 countries.

According to a 2018 survey by Saramin, a leading South Korean recruitment website, 57% of human resources managers at South Korean companies agreed that job applicants’ appearances influenced their evaluations. The survey also showed that female applicants are more affected by their looks on their job evaluations than male applicants.

As more women begin to embrace feminism, there’s also a new willingness to challenge strict South Korean societal demands that force women to take extreme care of their looks, according to Sohn Hee-jeong, a researcher at the Institute of Gender Studies at Yonsei University in Seoul.

Consider, for instance, a video by Cha Ji Won, a 24-year-old YouTuber who runs a channel called “Korean Womyn.”

The video, which has gotten more than 720,000 views, shows her daily routine after she stopped obsessing over her hair and wearing makeup every day and began choosing and wearing comfortable clothes.

It now takes her half the time to prepare to go outside as in the past, and she says she eats whatever she wants and doesn’t think about calories. In this Jan. 15, 2019, photo, Cha Ji Won, a 24-year-old YouTuber who runs a channel called "Korean Womyn." speaks during an interview in Seoul, South Korea. Cha's video, which has gotten more than 720,000 views, shows her daily routine after she stopped obsessing over her hair and wearing makeup every day and began choosing and wearing comfortable clothes.

“I hoped that by letting other women know that there is someone like me, I could remind them that they don’t have to care too much (about how they look) and spend so much money and time on their appearance,” Cha said in an interview.

The movement can also be found in schools.

An 18-year-old high school senior who wished to be identified only by her last name, Hong, because of worries about her future studies recently exposed a series of lectures at her all girls’ school that promoted a focus on women’s appearance as they entered college.

Hong objected to her high school recommending classes that appeared to encourage female students to “take care” of their appearance. Hong and some other students contacted journalists to complain about the lectures, prompting the school to remove the classes.

Hong said she put on makeup for the first time when she was in elementary school and was wearing full makeup by high school. She no longer wears makeup and questions why women must always be judged on how they look.

However, many children are ashamed of what in Korean is called ssaeng-eol, or bare face, Hong says, and won’t go outside without makeup.

South Korea has the world’s highest ratio of plastic surgeons per capita, according to a report by the International Society of Plastic Surgery in 2016.

According to 2015 statistics by Gallup Korea, about one third of South Korean women between 19 and 29 said they’ve had plastic surgery.

“They believe they should have a nice body and skin, beautiful eyes, nose and mouth, and even sleek hair with a perfect hairline. They also want to have good style.”

But Park says rising feminist movements and changing values among South Korean women are redirecting her industry’s depiction of beauty. In its December issue, Cosmopolitan Korea featured a popular South Korean comedian, Lee Young-ja, as the cover model. Lee is larger than the typical skinny cover models the magazine uses.

Choi Min Jeong, a former employee at a beverage company, still remembers her boss telling her that she had to work harder because she wasn’t as beautiful as a popular South Korean actress.

“Although he said it as a joke, I thought it was ridiculous that he said it when ... my job was unrelated to appearance,” Choi said.

Airline companies often demand a stricter dress code for female flight attendants, according to Kwon Su Jeong, a Seoul councilwoman who has worked for Asiana, a major South Korean airline, for 24 years. Kwon is currently on a leave of absence to work in the city council.

“They control everything, from your hairstyle to the colour of your lipstick and nails to the length and shape of your earrings,” Kwon said.

Although Asiana eased a “skirts-only” rule in 2013, many flight attendants still wear them because of worries of negative performance appraisals, Kwon said.

Asiana strongly denied that it makes unfair demands or puts pressure on its employees regarding attire or appearance.

Kwon said the company’s upper management wants its flight attendants to uphold an image of a graceful, beautiful Asian woman who provides sincere service to customers.

Because the company cares a lot about the appearance of its female employees it puts subtle pressure on them to have cosmetic procedures, she said.

“Although the company is rigid about taking a day off because of injury at work, it is more lenient about taking time off for cosmetic procedures,” Kwon said. – AP
Article type: metered
User Type: anonymous web
User Status:
Campaign ID: 1
Cxense type: free
User access status: 3